A Spellbinding Night Of Storytelling 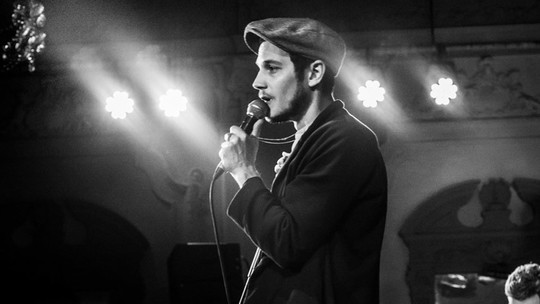 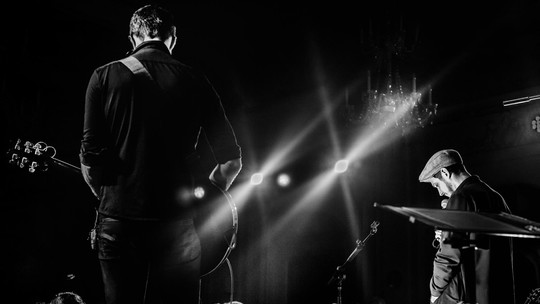 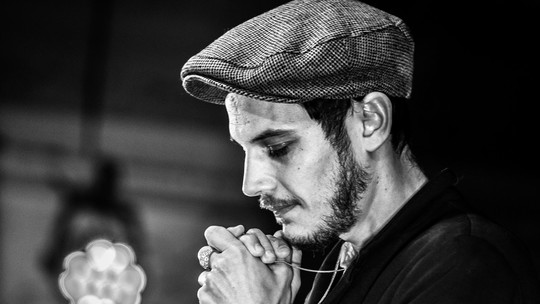 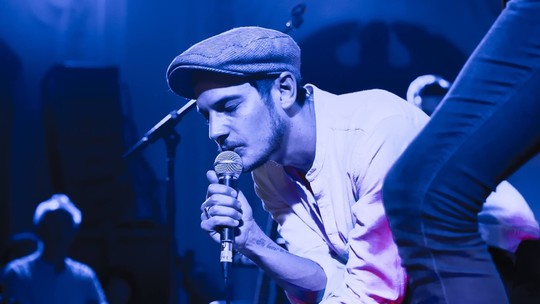 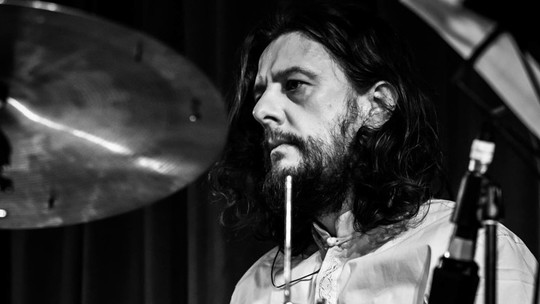 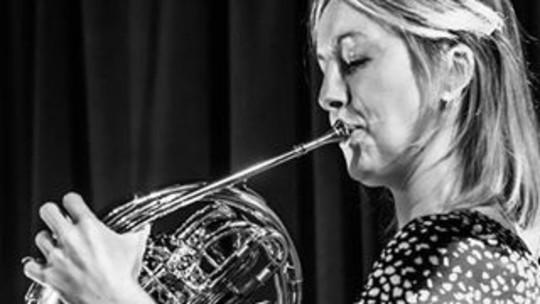 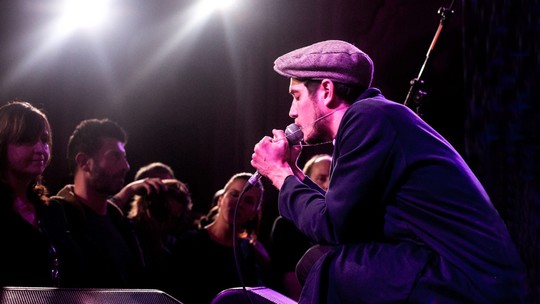 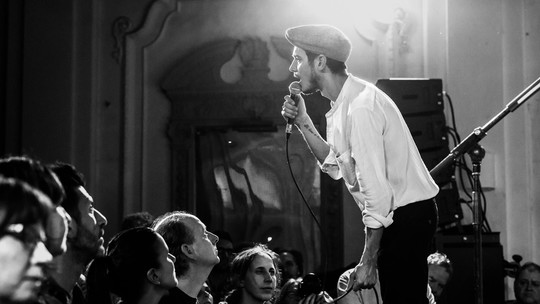 Having been offered tours in Germany and Switzerland almost immediately after the band formed in 2010, The Slow Show are now major festival regulars in mainland Europe, selling out shows in The Netherlands, Belgium and Germany. At home here in the UK, the Manchester five-piece are still relatively unknown.

Their music has been championed by DJs at BBC 6 Music and Radio 2 ever since their debut EP, 2012’s ‘Brother’. In recent months, they've been featured as record of the week on Dermot O’Leary’s Radio 2 show and most recently, on Edith Bowman's Virgin Radio show.

I first came across the band two years ago on a digital music service site and saw them perform at indie circuit staple, The Lexington, near London's King's Cross. Friday night's gig however was on a different scale. It was the first date of the UK leg of their headline tour, promoting their new album, 'Dream Darling', which was released at the end of September.

The venue was a sold out show at the stunning Bush Hall in Shepherd's Bush, west London. A former dance hall with its Edwardian decor, beautiful chandeliers and ornate cornicing, it was the perfect size - not so big that you feel alienated from the stage but not so small that you turn into a claustrophobic, sweaty mess. This of course would never be the case at a Slow Show gig.

The evening began with some chilled indie folk tunes from a band called Mirror Furies. The set-up was simple: acoustic guitar, keys and vocals. The lead singer, a girl with striking blonde hair and wearing a Breton stripe top, looked like Debbie Harry but evoked 90s singer Jewel when she started singing. It was a pleasant surprise. The songs were emotive, raw, powerful and utterly compelling.

Two tracks stood out: "Born Screaming" - a lush lullaby of a song with a guitar melody that fits beautifully with the fragile lyrics that speak of letting go of someone you love; and "Closing In", a song about coming out of the closet to your family. Vocalist Carina Bragg performed with such vulnerability and emotional exposure that it caused a gig goer to my left to be visibly moved. Having never heard of Mirror Furies before, it's safe to say that when music resonates in such a way, you know it's good.

The band, well received by the attentive and observant crowd, have an EP out on 18 January.

When the time came for the main act, the sense of anticipation in the room was palpable. The Slow Show, (the name comes from the band’s determination not to make hurried music), enter the grand ballroom in an easy-going laid-back style to a backing track of choral music and launch straight into the first track from their sophomore album, a song called "Strangers Now".

Vocalist Rob Goodwin, bare-foot and wearing trademark flat-cap sings "Who’s calling? Who’s calling? Who’s breaking your heart tonight?" with a raw and painstaking fragility. The song is about how relationships can change so quickly and dramatically. For Goodwin it's a very personal song that talks about the breakdown of his own 12 year relationship. His deep baritone voice, a cross between Lou Reed and Matt Berninger, instantly brings goosebumps and pierces the heart of the listener. A self-proclaimed story-teller then singer, Goodwin is unguarded, attacking each syllable and note with a sense of purpose. He tugs on his necklace every so often and uses gestures to accentuate the personal and affecting lyrics. You can really feel the pain that he's trying to evoke.

And with that, we're transported into the dream odyssey that The Slow Show imbue. The opening track is a window into the rest of their self-produced second album, aptly named 'Dream Darling'. It's a magical collection of vivid story telling, that any adult who's lived a little can identify with; even when the loss of a loved one, new life and break-ups feel monumental to the people experiencing them. The theme of change and ordinary lives runs throughout.

As their name implies, The Slow Show have both a magisterial beauty to their sparse songs and the confidence to let their spellbinding four-minute stories find their mark. Their music is beguiling, hypnotic and utterly seductive. They're not afraid to use silence either as a potent tool. "Dry My Bones" a song about drinking gin on your own, is a hopeless promise and conjures up a lonely existence in an empty northern town on a grey wet winter's day. The brass instruments, French horn and trumpet, are eloquently used and come to the fore on this track in their soft and gentle form.

Prior to launching into "Dresden", a personal favourite, Goodwin discloses that it's a song about going on tour for the first time and figuring out that it's a really good thing. The track, the first song on their debut album 'White Water' starts off with a choir singing operatic notes and harmonies, and instantly creates a church-like image in the listener’s imagination. Repeating "This is a breakdown" throughout, Goodwin juxtaposes this mantra with steady, strong vocals. As the song progresses, it conjures up an image of a locomotive hurtling down a train track and all of a sudden coming to an abrupt holt. You're left wondering, 'what now?' The song is dramatic, powerful and poetic.

The set included some captivating songs: "Hurts", a stark track about lonely men and working girls; "This Time", a song about new beginnings; and the heartbreakingly beautiful "Last Man Standing", a song about a guy that's been left jilted at the alter, and loosely based on someone that Goodwin knows. "Fascinating story. Apparently it happens in real life, unfortunately", Goodwin remarks.

The beauty of The Slow Show is their ability to seduce you and take you on a powerfully fascinating journey that captures the musings of everyday man. Current single "Ordinary Lives" is exactly that, and combines many sound textures. It's a song about love and losing people. What could have been a reflective song is optimistic, with its beautiful orchestration of strings and brass over a rallying guitar sound. The song attempts to celebrate the changes that have happened for the band in the process of creating the new album. There's a blink and you'll miss it moment too from drummer Chris Hough mid-song, when he does a little happy shoulder shrug and throws a wry smile to the lead guitarist as if to say, "yeah, we made it through. Let's enjoy this moment." It's delightful. As the song ends, even Goodwin is visibly moved by the crowd's reaction. He's reflective and takes a moment to take it all in.

While they’re proud of Manchester’s heritage, musically The Slow Show stand apart. As my gig buddy put it, "they're a bit like a slowed-down version of (rock band) Editors". Influenced more by Sigur Ros than New Order or The Stone Roses.

For a band that play all around Europe it's a shame that The Slow Show don't perform more in the UK. As Goodwin remarked, it's because "no one likes us here apparently" but that wasn't the case at Bush Hall. The 350 strong crowd were bewitched and mesmerised by the band's unique sound and great knack for storytelling. The kindness and warmth of the captivated audience was reciprocated by the band, 'It's the first night of the UK [leg of the tour], the rest will be a struggle. This has been absolutely perfect'. And it was. In every possible way.

'Dream Darling' is an enchanting aesthetic album that shows anything is possible. Yes, it's dark and brooding but it's also very rousing and beautiful. There's a sense of hope. Any change and upheaval can be overcome. No matter how gentle the beauty of their songs, The Slow Show are a band that are definitely worth seeing live and ones to shout about from the rooftops. They deserve all the success in the world. It was a treat to see them.