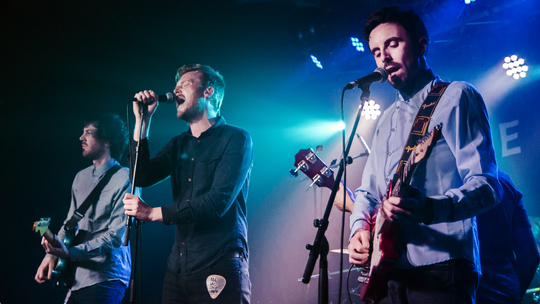 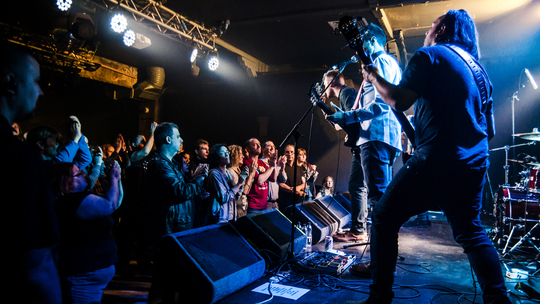 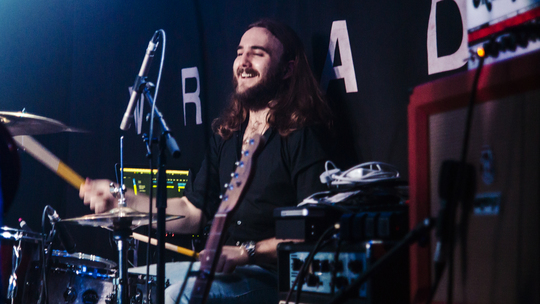 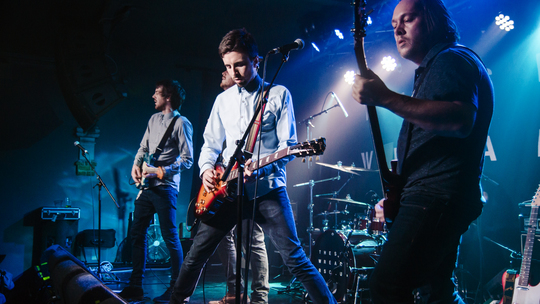 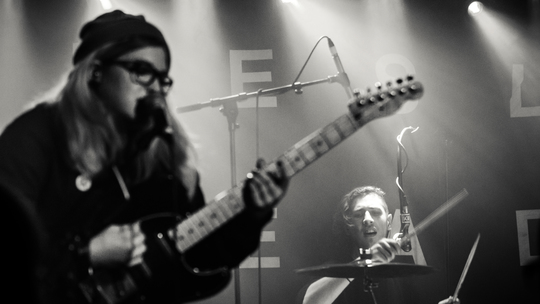 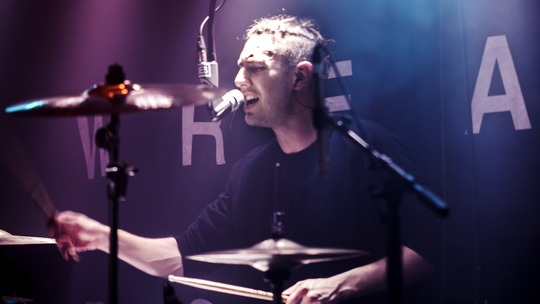 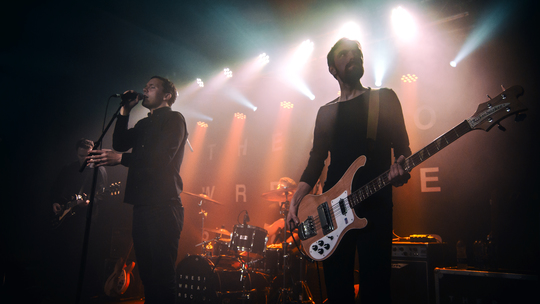 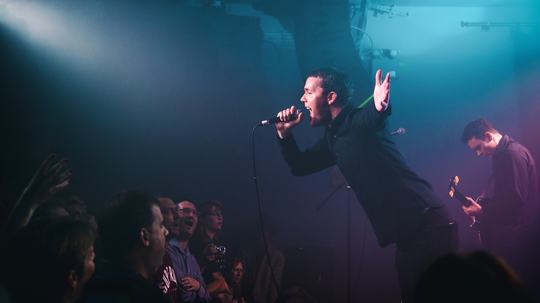 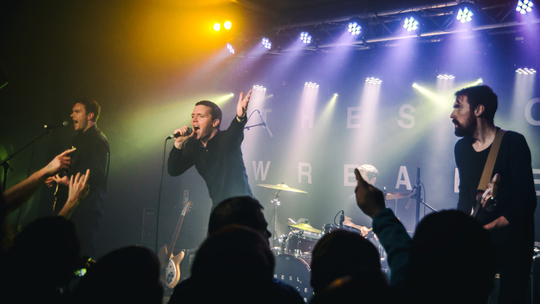 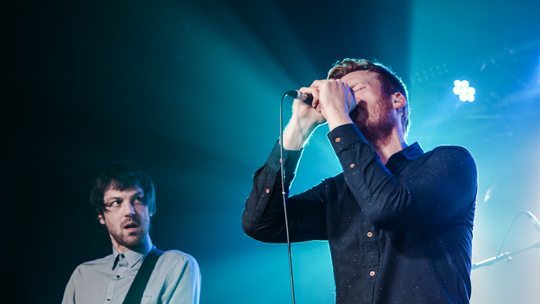 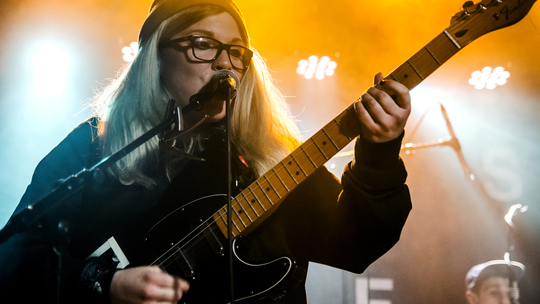 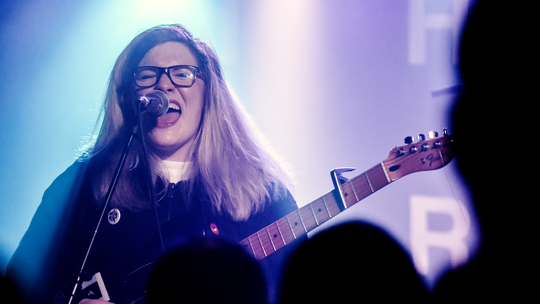 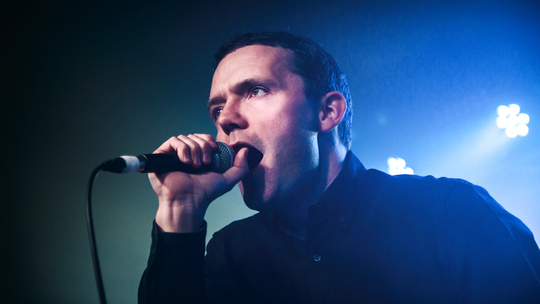 On a cold winter's evening my gig buddy and I, pleased that we'd successfully navigated the somewhat tricky overground network, arrived at our destination: Oslo. No, not THAT Oslo, but a cool indie live-music venue in Hackney. Having bypassed the burly bouncers guarding the downstairs area (a modern, hipster-looking bar), and picked up our freebie 'I am a Slow Reader' badge (great bit of merchandising!), we made our way upstairs to where the music happens.

The first act of the night was an unsigned Manchester-based band called Puppet Rebellion. Formed in 2013, they’ve already amassed a huge following on social media. The band have so far released three critically acclaimed EPs: 'Chemical Friends', 'No Means Yes' and 'Life is in Your Hands'. Their sound drawing you in with their uncompromisingly heartfelt lyrics, stirring choruses and edgy, in-your-face contemporary musical arrangements that instantly grab you.

Puppet Rebellion ploughed through a strong set list. It comprised of personal favourites, “Claim To Fame”; current single “Fragments” with it’s sumptuous guitar loops and stirring drumming from Henry Rogers; and more enticingly their next single, ”The Pact”, which is due for release this Friday, 2 December. With relentless riffs, tight rhythms and fervent vocals the band played to the crowd as though they were playing a massive venue. When you listen to Puppet Rebellion you get a sense that they’re on to something rather good. There's a lot of potential here. Definitely an act to keep an eye on over the next 12 months. If you like The Sherlocks or The Rifles, you’ll like these.

Next up were Kent-based synth pop due SKIES. Up till now I'd heard of them but had never seen them perform. Their stage set-up was a little questionable: precariously placing a monitor to display the band's logo on one side of the stage. Nonetheless, as soon as the music started my ears pricked up. For a duo, SKIES manage to make a lot of noise - of the good variety. It's easy to see why they were picked up by BBC Introducing. The opening track, “Hold On” with lyrics of “Why am I mortal when I don't want to die”, is a dreamy-pop-rock song about mortality. Guitarist and vocalist, Alie Cotter has a distinct voice that on certain notes has a slight twang of Sinéad O'Connor going on. I like it.

Track “Monday” instantly grabs my attention and gets my foot tapping. It starts off dancey but ends up being quite emo-rock with great drumming action from Jericho Tozer. Cotter is in full-on energetic mode and ends up standing on a PA speaker in the middle of the stage to thrash out the chords. This is a great song with a huge chorus. A second EP is due for release in 2017, followed by a debut UK headline tour. If you're a fan of Model Aeroplanes, Secret Company, Natives or Youth Club then SKIES are the band for you.

As the clock ticked closer to our headliner The Slow Readers Club, the room was abuzz. The crowd, comprised mainly of men in their 40s were stood anxiously in anticipation. The sold out show saw the room packed to the rafters. The combination of bodies, bright lights and lack of air-con made it stiflingly hot.

For the unfamiliar, The Slow Readers Club are a four-piece electro-Indie band from Manchester formed in 2011 and fronted by Aaron Starkie. For an unsigned band, there is a growing buzz around them, managing to sell out gigs by word of mouth. They’ve supported Catfish and the Bottlemen and are currently supporting legendary rock band James on their “Girl At The End Of The World” tour. With a substantial following around the UK and further afield, The Slow Readers Club recently played their biggest headline show to date at the O2 Ritz in Manchester, having sold out the venue two months in advance - no mean feat for an unsigned band that still have day jobs!

To say that expectations were high for their London performance, was an understatement.

As soon as the band came on stage they launched straight into “Cavalcade”, the namesake song off their second self-released studio album. The song is a grower and harks of Joy Division. With lyrics of “Be still my heart. The stage is set. Throw all fear and doubt aside”, it’s a good start to the evening.

The Slow Readers Club have a knack for creating adrenaline inducing songs without the high kicks and overly energetic maneuvers on stage. There’s a drive and passion to each song, an invisible energy that emanates from the four-piece that cannot be denied. Starkie’s vocals ring through clearly with defiance and devotion in an almost meditative state. The crowd are swooped up in it. It's irresistible.

On mid-tempo track “Start Again”, Starkie is totally in the zone. Utterly focused and punching the air to heighten the brooding lyrics such as, “consternation crippling you”. The song has an 80s electronica new wave sound with an amazing bass line and an optimistic careering rhythm guitar.
On songs like sombre-yet-melodic “I Saw a Ghost” (a personal favourite!) and James-esque “One More Minute” it’s clear to see why these guys were chosen to support James. The hooks and choruses are addictive and get the crowd buzzing. They chant “Readers! Readers!” between each song.

We were privileged to hear two new songs being showcased on Saturday night: “Through the Shadows” and “Lunatic”. Both were well received by the crowd. The latter having a brilliantly infectious bass line which for a split second made my ears go deaf. The evening unfortunately ended all too soon, with The Slow Readers Club leaving us on impassioned track “Block Out The Sun” and it’s poetic lyrics of “Behold, what I’ve become. None of this matters, all things have shattered.” They certainly shattered the sound system!

It was high energy, high quality and highly entertaining. As one of the gig goers said to me, “they were the dog's bollocks. They deserve to be bloody huge". Indeed they do.