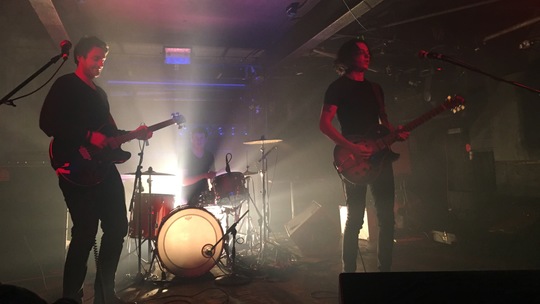 Establishing themselves in the so called neo psych scene in 2014 with the release of their DIY debut EP 'DMT#1', London based trio Desert Mountain Tribe (DMT) has proven to be a formidable live presence these last two years since sharing stages with the likes of Damp Suzuki, Toy and The Wytches. Seeing the band perform tonight at what these days is a rare London headline show, largely due to hefty pick-up on European touring circuits, one can only assume we do not have to wait too much longer before we see this group launch into the stratosphere.

Since the release of well received debut album 'Either That Or The Moon', back in April, on both sides of the Atlantic and across Europe, the Anglo/German three-piece have toured the album's worth pretty much solidly since, all the while learning a stage craft and certain artistic flare that immediately recalls the greats of rock and pop. Singer-guitarist Jonty Balls from deepest south London is a decadent presence and displays a wild abandon and mesmeric smorgasbord of mood not unlike Jim Morrison. Chuck in Ian Curtis for good measure and you are half way there.

Given the breeding of influence in this band, and as they hit the roof with album showstoppers like "Heaven and Hell", "Leave It Behind" and band anthem "Take A Ride" - I don't know about psychedelic - DMT is band more dark-a-delic!

Two years ago, an entertaining excuse for watching this band was seeing the young Balls struggle with his vast array of differently tuned guitars versus a pedal board and it's assorted and necessary effects in order to successfully pull off the almighty noise this band delivers, whilst maintaining the core tune, essential melodies and ordered structure of each song. These days, or at least on this night, Balls and his gothic rhythm section and wingmen, the teutonic Jahn brothers, are more relaxed on the stage who at times even dare to smile at one and other.

Perhaps easily misinterpreted as cocky exuberance, but not the case here one thinks, DMT are only having fun and enjoying the ride. It is a great night, the hardcore is in the room, and this band do have a lot to be cheerful about given their achievements this last year. It is a starry show delivered by a fantastic band. World domination for this mob can only be one more effects pedal away.