Astonishing Instrumentalist With A Soulful Sound 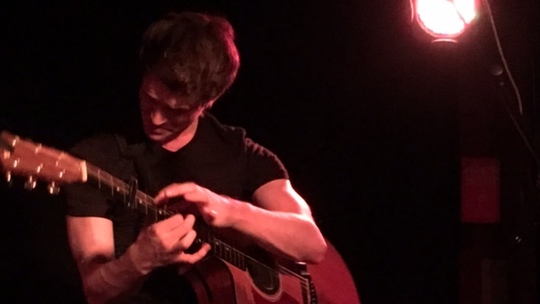 Any night of the week is a good night in London when it comes to music. Sunday is no exception. On this particular evening, three talented singer-songwriters performed at the O2 Academy in Islington.

The first act, Benjamin Yellowitz, was a case of "don’t judge a book by its cover". Having never heard of him or his music, initial impressions were "what do we have here?". Dressed all in black, tattoos and man-bun – and battling a sore throat – I was pleasantly surprised by the output even a few beats in. Acoustic guitar and the use of a stomp box made for some strong grooves and awesome, bold baselines. Tracks "19" and "Priorities" in particular were solid, with a dynamic RnB groove. The latter being Justin Timberlake’s "Señorita" in feel. With no management or label, this guy is doing well for himself, touring both the UK and Europe, and a few shows in the US. Verdict: strong vocals, edgy performance style and excellent instrumental skills.

Next up was upcoming singer-songwriter from London, Mike Wyatt. Looking all Christian Slater c. 1994, in plaid red shirt undone to mid chest, black jeans and brown boots he came on stage with a gung-ho attitude and his electric guitar. Tracks "Tell Me" and "Trouble" had some dreamy riffs, while "Move On" had a gorgeous roots rock quality to it. Wyatt’s voice full of gravelly, bluesy tones and laden with soul invoked elements of George Ezra. The Jack White cover of "Love Interruption" was a smart move too.

The headliner for the evening was Glaswegian singer-songwriter and virtuoso guitarist, Daniel Docherty. Having done a lot of busking in his hometown, the show at the Islington Academy was the first on Docherty’s UK tour. With an affecting, soulful voice and heartfelt lyrics, Docherty’s busking experience has really moulded him. With intricate guitar instrumental and the use of his whole body, track "Colours" had a truly mesmerising recital, much more powerful than on the recording. My favourite track, "This Holy Fire", a song about Docherty’s deceased Nana, was more beautiful and moving live than I’d previously heard. And "Overweight", a song about childhood imagination running away and something to do with a Wagon Wheel, flaunted Docherty’s story-telling skill. The gentle guitar on this track reminded me of summer rain.

The beauty of Docherty’s music is that with each song you get a real sense of life and emotion from the sensitive song writer. Equally, there’s a touch of Ed Sheeran about Docherty in the way he uses a loop pedal to produce some magical sounds. Track "Garden in the Snow" with lyrics of "hold your loved ones while you can" was written after a chance encounter with an old woman who’d lost her husband. Song "Busking" is about all the things that have happened to Docherty while busking. This song was well received by the audience who clapped and sang along to the chorus of "I’m busking. Leave me alone. I’m busking. I’m trying to play. I’m busking." It’s a jokey, tongue-in-cheek, song with the odd swear word that went down a storm with the crowd.

Docherty’s guitar playing skills are faultless, at times playing two handed and doing tricks with a guitar that I’ve never seen. A fellow gig goer noted that Docherty has the same guitar technique as John Butler, of John Butler Trio. All in all, the night was a success and Docherty’s performance was brilliant. The young musician is a remarkable instrumentalist that needs to be seen.