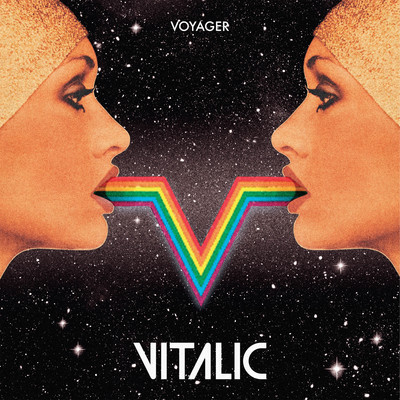 Vitalec is a French electronic music veteran who creates musical soundscapes in a similar way to Jean Michel Jarre.

Unlike Jarre he does use vocals, however, so David Shaw guests on the second track "Waiting for the Stars". He has a voice that puts you in mind of Black and Gold singer Sam Sparro. The music and vocals combine beautifully to make the track an 80s style treat.

The third track "Levitation" is possibly influenced by Kraftwerk with its man-machine style vocals repeating the same phrases over an insistent synthesizer. Unfortunately, unlike the German masters the track doesn’t seem to go anywhere and after about 3 minutes has definitely overstayed its welcome for me.

"Hans is Driving" mines a very similar territory, but succeeds in being much more interesting thanks to Miss Kittin’s hypnotic vocals.

After two very forgettable tracks, "Eternity" brings the listener back in to the album with a gorgeous Jon and Vangelis style song that features a suitably enigmatic tune together with Celtic style vocals at various points. It was the first song on the album that really made me understand the reasons behind his longevity as it would hold its own with the highpoints of the genre.

The following track "Nozomi" maintains the improvement as its insistent beat buries itself in your brain. "Sweet Cigarette" sounds like a Pet Shop Boys B Side which, for those of you who know their more experimental side, is definitely a compliment.

The final track "Don’t Leave Me Now" sounds astonishingly modern compared to the rest of the album and could become a club hit with a decent remix.

It is a bit of a frustrating album in that it is about three tracks away from being excellent. The misfires take the listener out of the album and in today’s Spotify world that could be the end of it. Give it a chance but take my advice and listen to it in reverse to really understand how good this could really be.