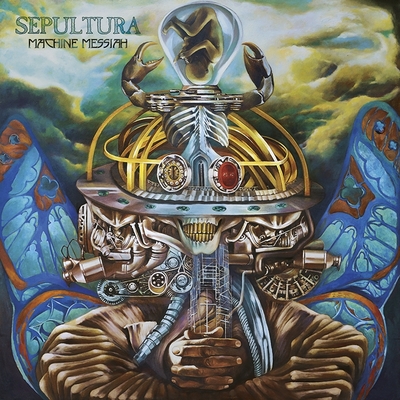 Formed in Brazil, Sepultura have long since cemented their place in Metal. From underground roots to playing the prestigious "Rock in Rio" in just a few years the band have released some classic Metal LP's. For many their seminal 'Beneath the Remains' still ranks amongst the top 20 all time great Thrash/Metal albums. Founder member and frontman Max Cavalera left the band in 1997 and for many outfits that would have hailed their demise, however vocalist Derrick Green joined them and gave the band a new lease of life and they have continued to evolve, right now they are on the form of their lives.

So with all that in mind let's give it a whirl.

Title track and opener "Metal Messiah" sets the scene. This is without a doubt a well crafted and great sounding album. Producer Jens Bogren(Opeth/Kreator/Ihsahn/Paradise Lost) allows the band the freedom to perform, whilst he takes care of the details. Instead of hitting you straight on, the track builds in its intricacy slowly drawing the listener into the world of Sepultura 2017.

"I am the Enemy" now hits you full on with Green's vocals and the intricate guitar work of Andreas Kisser thundering through the track. What we have here is an album of well crafted and glorious tunes. The music takes you from percussive monsters such as "Phantom Self" to dark metal tunes such as "Sworn Oath". Closing track on the album "Cyber God" is, in this reviewers opinion, by far the best track on offer. Kisser's guitar work is just outstanding and sums up what Sepultura is all about. There is a maturity of songwriting and musicianship you can only expect from a band with this much professionalism and skill.

“It’s a privilege to be in a band like Sepultura, 32 years into a career, and these are possibly the best times of all for us,” says Kisser. “It took a long time after Max left, we lost everything, so it took a while to rebuild everything and to find the right people to do stuff for us, but we’re in a good place now and we’re really excited about 2017. I love touring, man! We can’t wait to get back out there. Onstage is where the time stops and you lose your connection with reality and go somewhere else, and you have that exchange of energy with the crowd. It’s life - pure life.”

I for one cannot wait for them to return to the UK and hopefully I'll be there at the front with my camera ready to give you a full Subba-Cultcha.com review.