All These Countless Nights

Hard Of Hearing Cubans Release Their Best Album Yet! 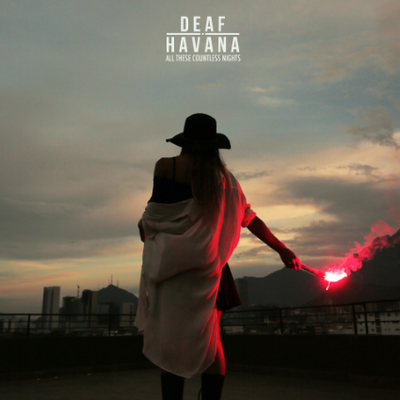 All These Countless Nights

Norfolk band Deaf Havana are to my knowledge neither deaf nor from Havana, but they are one of the best British bands around right now, especially if you have had the pleasure of catching them playing live. The band formed in 2005. They had released seven EPs by the time their first album ‘Meet Me Halfway, At Least’ came out in 2009. Their new album, the subject of this review, is their fourth and it is called ‘All These Countless Nights’.

The LP starts with a droning sound which sounds like it will herald something really heavy and psychedelic. It doesn’t, but it does launch a bloody good song in “Ashes, Ashes”. “Trigger” follows this and would have been my choice for album opener. “Trigger” is probably my favourite track on the album. I think that this song will be immense live. I have seen Deaf Havana live a few times at festivals and I can see “Trigger” generating a mass sing along accompanied by thousands of fists pumping the air. If they are at any festivals that I attend I will be among those singing fist pumpers!

I really love the lyrics to “Happiness”. It feels like a kind of self-recognition of personal issues and behaviours and how they impact on the people around him. Are these autobiographical words from singer James Veck-Gilodi? There are parallels with some of the songs on that bloke who used to be with Keane, Tom Chaplin's solo album. I felt shades of U2 and Walking On Cars coming through on “Fever”, a pleasantly heavy track. Talking of heavy, Matthew Veck-Gilodi has a full on guitar wig out on “Like A Ghost”. If you love screaming guitar then you’ll love this one, there is some pretty decent acoustic work in the quieter moments too.

Can a song be uplifting and depressing at the same time? I think that “Pretty Low” can, the lyrics are as it says on the tin, pretty low, but there is a strangely uplifting feeling to the music.

“England” contains a simple but powerful line, ‘England get out of my head", well I certainly feel like that at times. This is a great driving song and I can see it appearing on one of the many Driving Rock compilation CDs that are stocked at Motorway Services. I have always loved a song with a tale to tell and “Seattle” feels like that. To me it appears to be a heartfelt summary of travelling and it suggests a lost love in America.

Right now another favourite of mine on this album is “St Pauls”, it’s a grower. An emotional and soulful song from a very soulful and emotional band.

I love the undertone of anger on “Sing”. Anger with others but also self-anger. I get a feel of Thin Lizzy in the guitar riff here. Incidentally it would great to be able to hear Phil Lynott sing a song like this, sadly that is not possible. “Pensacola 2013” is the perfect song to end the album on, it certainly left me with a high and wanting more. I really love this album and if the charts meant anything any more it should be sitting at the top for a while.