Don't Be Alarmed, It's Less Than Jake! 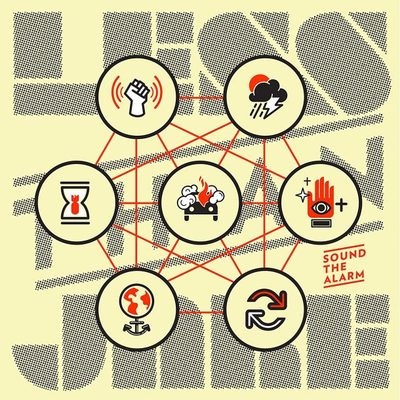 It’s hard to believe that Less Than Jake have been around for something like 25 years having formed in Gainesville, Florida back in 1992. They have released a staggering number of albums in that time, the first being ‘Pezcore’ in 1995, and ‘Sound The Alarm’ is their ninth LP. This is their first release on Pure Noise Records.

The album kicks off with “Call To Arms” and what a classic Less Than Jake opener, full on powerful ska pop punk with everything turned up to 11. There is no let up as “Whatever The Weather” follows. This is among many songs on here that bring out the big ska influence on Less Than Jake’s particular brand of punk.

I love this band in the same way I love Reel Big Fish and I am sure that they share many fans across the world. As for “Bomb Drop” well I defy anyone to listen to this song and not sing along and bounce around. If I am ever in a coma please play this to me at full volume, I reckon that would bring me back to life. I hope they play some UK dates this year, because this will be a proper crowd pleaser. Oh did I say that this is my favourite song on the album?

“Welcome To My Life” is the halfway point and it slows things down just a little, but at my age I welcome that after the bombast and firepower thrown up by the first three tracks. Oh boy this album does what it says on the tin, it really is a complete alarm call for all pop, punk, rock and music fans generally. “Good Sign” is a great tune. Listen to this album rather than watch some shitty Saturday Night entertainment that masquerades as a talent show. This is real music not the bland offal fed to you by X Factor, American Idol and similar shows.

There are some great radio friendly songs on this record and “Years Of Living Dangerously” is one that I reckon would work on the playlists of a massive range of stations, certainly in the UK. I do believe that even my Mum would like this one. Next there is another Less Than Jake classic in the making in “Things Change”. This is a brilliant mini album or EP. My only criticism is that it left me wanting more. But what is contained in these seven songs is a great addition to the Less Than Jake canon. Buy, download or stream this record, you will not be disappointed.