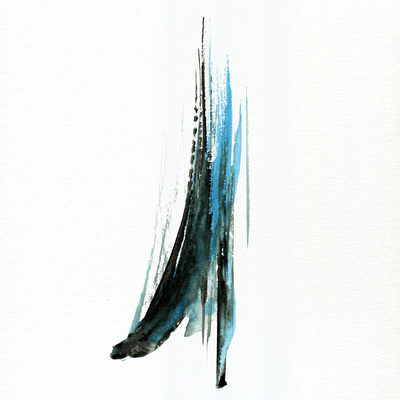 The prefix 'post-' is usually a danger sign. In music, as in politics, it often means somebody is seeking to diminish whatever it's added to. I reviewed Rivière's 'Heal' because it was described as prog, but unfortunately the description 'post-metal' was also applied just as accurately.

The prog label arises from the prevalence of long songs with a plethora of time changes, from opener "New Cancer" to closer "Yosemite" via "Satin Nights". There are plenty of atmospheric soundscapes in the longer songs, as well as electronics, especially on the short instrumental "Cobalt". The soaring vocals, notably on "Golden Wounds", also recall Periphery's clean vocals at times, but unlike Periphery, it's a lot harder to make out what Rivière are saying. The words to "Satin Nights" are a fancy way of describing a basic desire, but I am left wondering whether the title of "Symbol" is a pun as the lyrics are impossible to make out, but the cymbals are oddly prominent despite not being hit very hard. Meanwhile, from what I can make out of the words to "New Cancer", the story is being told from the point of view of someone trying to destroy somebody else the way the disease would. However, although prog is associated with using every element to convey an idea, the musical restraint shown all the way through this song is at odds with the violent lyrical imagery.

This sonic signature like a gentler version of metalcore is what lets Rivière down. "Golden Wounds" and "Yosemite", for instance, have riffs that could be made so powerful if they went for it, but no, Rivière are determined to be 'post-metal' and rein themselves in. "Binary Love" begins with a modern metal riff and complex-sounding drumming, but dissolves into an electronic-tinged calm interlude and never really gets back to full strength. The trouble with a band not letting themselves get carried away is that it then becomes difficult to imagine fans in a live setting totally losing it to their music.

There are a lot of pleasant melodies on 'Heal', but the lack of energy makes this an album to listen to in the background rather than a focus for one's undivided attention. If I said it had made me desperate to buy a copy or go and see them, that would unfortunately be a post-truth.