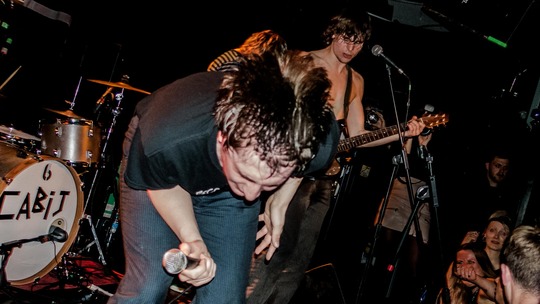 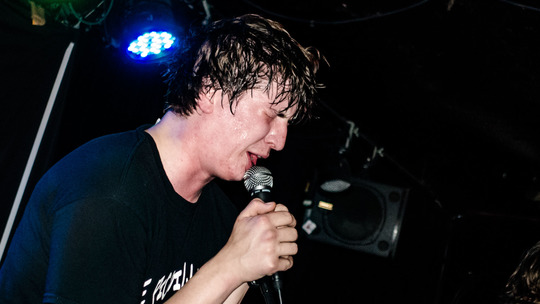 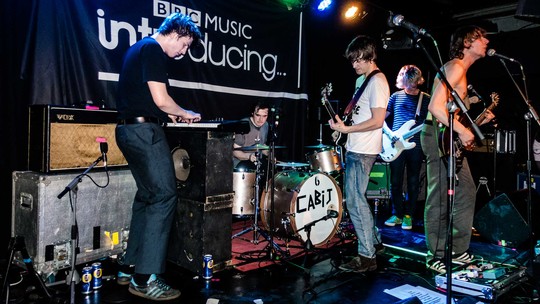 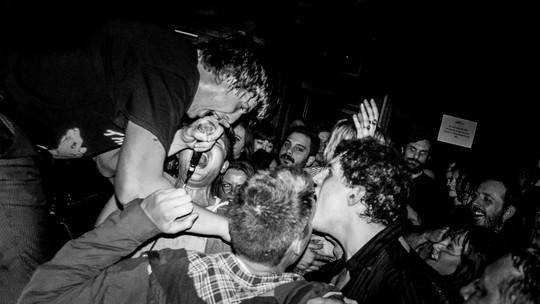 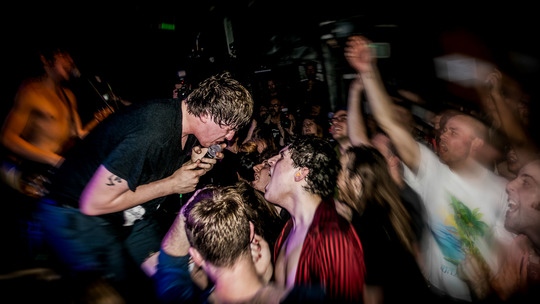 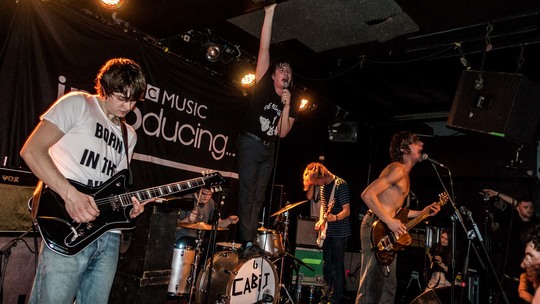 The fact that Steve Lamacq is here says it all, the man has a knack of being at the pivotal venues and gigs of some of the biggest bands around, and he introduced Cabbage to the sold out expectant London audience at The Lexington as exactly that.

The Lexington is a great little venue with some standing area at the back for the liggers and plenty of room around the front for the moshing. This Mossley (Near Manchester) based band have come down south to show the capital how it is done, and their supports The Shimmer Band and April were mighty fine additions to the night’s entertainment, both potentially worthy of the sold out status here.

Cabbage have built up a loyal following over the last 18 months, and the culmination of these efforts can be heard on the ‘Young Dumb and Full of Cabbage’ recent release, which they almost play in full tonight surprisingly minus the ‘Free Steven Avery (Death to Donald Trump)’ singalong.

Favourites ‘Necroflat in the Palace’ and ‘Uber Capitalist Death Trade’ get sweat flying from both the eager lot at the front and Lee Broadbent singer and chief of the mayhem. Broadbent is one of those characters where you are not quite sure what to expect, he could be plinking away on a keyboard at the back of the stage or, diving into the melting pot of the crowd, and many here are eager for him to do a lot more of that tonight.

What Cabbage offer though, is the antidote to the lethargy of current times, a shock to the system and some witty insightful lyrics that challenge that indolence.

For those of us that have seen the original key punk and post punk bands live, they are probably about as close as you can get to something equally gritty and seedy, with the angst of intelligent youth running throughout, and without resorting to what are now popular punk/rock/pop credentials. There’s no jumping around in unison, heavy tattoos, long hair and beards or pierced rebellion sentiments here, no, this is much more of an anti-corporate establishment protest rally, made by a bunch of fresh faced older kids, whilst simultaneously getting pissed and having a bit of a laugh, and it’s all set to a Dead Kennedys soundtrack.

‘Dinner Lady’ gives Joe Martin a chance to break away from the guitar, and stripped to the waist he delights the Lexington with a slow burning tale of private school lunchtime nightmares - you may never eat quiche again!

Joe and Lee are the key ringleaders, but special reference has to be made of the remaining members who provide some very raw and tight guitar, bass and drums, essential to the mayhem and the dynamics of the band. ‘It’s Grim up North (Korea)’ is another bizarre direction for them to take as it’s much more laid back, but it serves as a much-needed breather before they unleash ‘Necroflat’ and ‘Kevin’.

Cabbage came to show London what they are made of, and as usual it was intense mayhem on stage and off and every person in that audience left with a new favourite band to talk about. A band with equal parts political conscience and chaos, will they be the next big thing from the North West – who knows, but it’s going to be a lot of fun to watch. Make Cabbage a regular part of your musical diet!