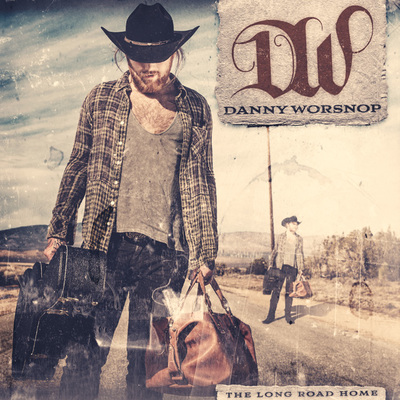 You may know Danny Worsnop best as the main man from Asking Alexandria or even We Are Harlot. Well did you know that Danny who hails from my adopted county of Yorkshire and has a solo album coming out? Well he has, it is called ‘The Long Road Home’, it is released in May 2017 and it is very, very..... you’ll need to carry on reading to see what I think of it!

The album opens with footsteps, perhaps even worn cowboy boots on sand followed by the sound of a needle connecting with a record. Almost fittingly for me “Prozac” has that old school Americana feel about it too. Prozac and coffee black for breakfast? Wow that is some life that has been lived. Indeed Danny really has lived an eventful life, from massive success with Asking Alexandria to periods of rehab and homelessness. The raw emotion of this album is perhaps most apparent on that first song. “Mexico” has a real easy feeling and makes a great driving song, a bit like the Eagles on speed. If you ever feel so hungover, pained and out of it then there is absolutely no way that you will not be perked up by the humorous, driving and parky ear-worm that is “I Feel Like Shit”. The more you listen the more this feels like a full on Nashville album. “Anyone But Me” has a strong country feel but also has veins that are pumped with rock infused blood, a proper power ballad for the 21st Century.

I really love “High”, it is perhaps one of the best heartbreak songs I have ever heard, it’s as though you can feel the tears infused in the melody and the sadness in the lyrics. How great a chat up line is “I got bones when you’re ready to jump ‘em”? I doubt if even my brash teenage self all those years ago would have had the wiliness to use that. But that is my favourite line in “I Got Bones”. So not only do you get rock, country, Americana you even get a gospel style back up on “Quite A While”. This record has everything, including banjo which opens “Don’t Overdrink It”. Which in spite of the title is a stone cold classic drinking song. A really powerful and rock-tinged lament for love that has been lost is what “I’ll Hold On” is and, maybe because I have been drinking I feel like I would like to hear Rod Stewart tackle this one.

The ghost of John Fogerty is walking all over “Midnight Woman” in my humble opinion, proving that some hauntings can be magical. The most appropriately titled song to end the album might well have been the penultimate track “Same Old Ending”. To hear Danny duet this with Willie Nelson would be something marvelous to behold. The actual ending though is the high octane “The Man” on which Danny really lets rip with a vocal that might have occasionally come close to shredding his tonsils. The easiest way of summing up this album for me is that it is just bloody god and I want to listen to it again as soon as it has finished!