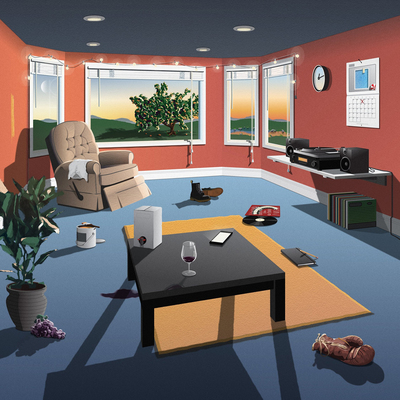 Sitting in a circle with your old friends and new friends in your living room, it's reached that time of the night where you either keep drinking or you retire to your bedroom. Then that new friend takes over your Spotify and you find yourself wanting to remain in the circle; the thought of bed seems so distant. The product of motivating me to stay with my friends, feeling tranquil and completely at one was Hippo Campus. I have immediately taken a liking to the new friend and impulsively thank them for introducing Hippo Campus to my life.

Hippo Campus are very very new and very very good, their debut album 'Landmark' is set for release on 24th February and if you're looking for a record to make you smile then this is the one for you. With a huge mix of soft, solemn songs that will make your mind go on an adventure such as "Epitaph", "Monsoon" or a fun, catchy song to make you dance such as "Way It Goes" or "Western Kids". Hippo Campus have produced a beautiful, coming of age record that everyone will be "shotgunning" they heard first.

If you're a fan of Swim Deep, Peace and JAWS then you will adore 'Landmark'. Consisting of 13 tracks the album is perfectly constructed and thought out, opening with "Sun Veins" with a short duration, it's an insight into the experimental and beautiful minds of Hippo Campus. Then jumping into the poppy upbeat "Way It Goes", and with a repetitive structure of highs and lows its the connotation of the emotional journey Hippo Campus take you on.

With this journey you are constantly surprised as each track throughout the album becomes your new favourite song; at first "Monsoon" with it's thought provoking, deep and slow sound is the pinnacle track on the album but as you keep on listening songs such as "Vacation" beat the rest. Albums like this are rare - especially for a first album and with each track relating to an emotion be it happy or sad, well that's just genius from the creator.