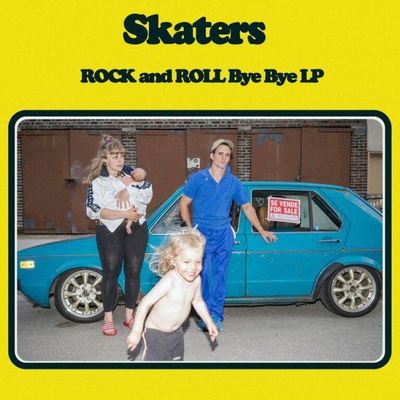 Skaters are an Anglo American band whose sole Brit member is a former Dirty Pretty Thing, as in he was in that band rather than he is not now a clean ugly thing. Anyway ' Rock and Roll Bye Bye' is the second album from Michael Ian Cummings (singer and songwriter), Noah Rubin (drums), Dan Burke (Bass guitar) and Joshua Hubbard (guitar). They are collectively known as Skaters as that is the youth culture they came from.

There are a lot of influences woven into this record. Whenever I hear "Northern Soul" I think of the Kinks, but I am still not really sure why. It has a distinct sixties vibe, particularly in the fuzzy guitar and the trippy backing vocals. But in addition to the distant past this would also fit within the broad range of what became Britpop in the nineties. "Head On To Nowhere" is possibly my favourite track on this whole splendorous collection, well at the moment at least. It is very Blur-like, before Damon and the gang went all Pavement on us. Talking of Blur, how about "Song 19 (Revisited)"? OK it is only a similar title to a Blur song. It is a stand out track from this long player. My only complaint with this song though is that it is just woefully too short, but while it is on there is a distinct whiff of classic Weezer and that can only be good right?

Bobby Gillespie would be proud of "Criminal Feels", it would sit among Primal Scream's finest, but it is most definitely no rip off, just a brilliant song. "Respect The Hustle" appears to be a New York story of some kind. It comes with a brilliant jaunty electro-style backing at times. It strikes me like a pared down track from the Killers and I meant that as a compliment. I love Brandon Flowers' mob, but sometimes I think they let the production get above the tune.

The production on 'Rock 'n' Roll Bye Bye' is understated and sometimes borders on low-fi, but the power of this band still shines through on every song. This album contains an abundance of ear worms and "Mental Case" is for me the one that really drills its way into the frontal lobe. Even hours after listening to it I continue singing 'I'm a mental case' to myself or anyone in my vicinity.

So many songs that mention punk in their title or lyrics tend to morph into weak clichés. But "I'm Not A Punk" in my not so humble opinion, does not fall into that trap. It is a great song; however it is not a punk song, which is why it works so very well. The title track is a chilled reflection on the early years of being in a band, Skaters perhaps? It is a truly stunning story song. Finally another favourite of mine is "Restless Babe"; I am sitting outside a pub with a refreshingly cold beer, the sun is shining, this song is blasting from the jukebox and everything is right with the world! Buy this album, you know it makes sense!