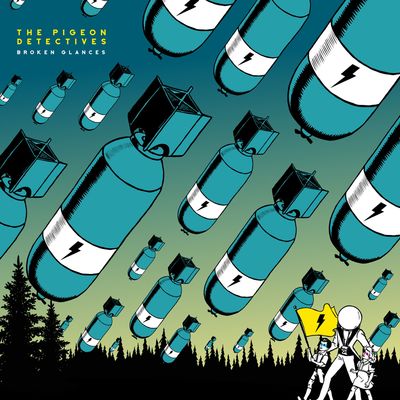 The Pigeon Detectives are back with their 5th studio album 'Broken Glances'. This album, I would say, is another stepping stone for the guys in this stylistic and diverse British band.

After seeing these guys perform only last year in November I was surprised to hear such a risky and different side, tone and sound for their music from previous albums and earlier hit songs such as 'Dance to the Radio' and 'Take Her Back'. Their use of sound for this album was tasteful to see especially expanding their theme to what I would called 80's electronic with songs like 'Enemy Lines' and 'Munro'. Also alongside this use of softer ballad themed songs like my personal favourite 'Wolves'.

However it still begs the question; was this style of music pulled together in an album a great decision for the band or will this change towards songs like the named 'Falling In Love', change their fans to distaste?

In my opinion every band has this stage going through therapy where people face experiences that change the way they write and create music. Which fans sometimes hate, despite this though; this is a great deserving album that shows what the band have to offer and one to talk about during their career. A final word towards another one of the greatly created songs, will all be 'A Little Bit Alone'.

If you're a fan of great British rock or The Detectives themselves be sure to give this a listen.