A Listen In Thundercat Land 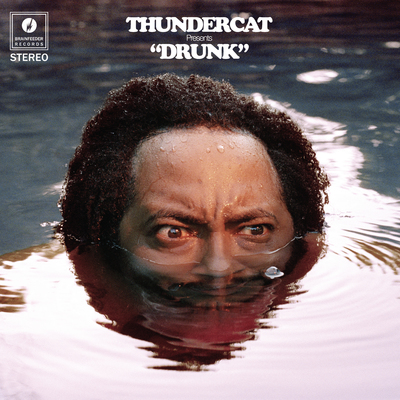 'Drunk' is the fourth studio album from Thundercat, who despite the name, is not a new addition to the Marvel Cinematic World, although his many talents and unique look make him a superhero of sorts. Thundercat is a Grammy award winning bassist, producer and singer, who alongside his ambitious and alluring sounding solo projects has worked with some of musics biggest names from Erykah Badu, Childish Gambino and Kendrick Lamar to name but a few. His work with some of the biggest names in music continues on his latest release with collaborations from Kendrick, Pharrell, Wiz Khalifa as well as legendary singer songwriters Kenny Loggins and Michael McDonald and many others.

At first glance, the 23 track album may seem an overwhelming listen but this only equates to a run time of just under an hour, which still by today’s standards is a fairly mammoth length. Time flies by when listening and this is partly due to the layout, with several short interlude type tracks peppered alongside the full length tracks as well as the upbeat and fun sound of the album.

'Drunk' opens with "Rabbit Ho", a short track that entices you down a rabbit hole and into the weird and wonderful world of Thundercat. From here you are prisoner to this ever changing aurally hallucinogenic world that has been created.

"Uh Uh" is an instrumental interlude with a fast piano which contributes to giving it a scat jazz style sound with the only vocals being an occasional ahh ah - ooh ooh over the instruments.

"Walk On By" features Kendrick Lamar, having previously collaborated together on 'To Pimp a Butterfly’s' "These Walls". Thundercat’s mellifluous and melodic voice almost melts into the beat before Kendrick comes with an expectedly good verse. "Walk On By" has a lucid and dreamy feel and transfixes you, almost like staring at a lava lamp in a daze just taking in what is before you.

"Friend Zone", one of the singles, cleverly released on Valentines Day, is an antithetic ode to the sickly sweetness of Valentines Day. Thundercat explores the woes of being in the dreaded friend zone, in his own unique way. He tells those he is zoned by not to contact him after hours “unless you planning on giving me some, because I got enough friends.” and that he would much rather sit playing Mortal Kombat instead of being part of their games.

"A Fan’s Mail (Tron Song Suite II)" is a follow up to Thundercat’s "Tron Song" and is an ode to his cat: Turbo Tron over 9000 baby Jesus Sally, or Tron for short. The hazy sounding song opens with Thundercat meowing over the beat, before singing about the pleasures of being a cat.

'Drunk' also contains the, now somewhat ironically named, track "Them Changes" which also features on 'The Beyond/Where the Giants Roam'.

In the vein of "Tron Song II", "Tokyo" is a musical declaration of love for Tokyo. The tempo of the song and the lyrics almost epitomise the feelings of something they have a fanatical like for. Some of these fun and sometimes, laugh out loud, lyrics include “gonna eat so much fish I think I’m gonna be sick,” “it was premeditated trying to get someone pregnant it wasn’t her fault I’m just kind of psychotic” and “I think that I’m Goku” which illustrate his love for Japanese culture including everything from the food to their love for anime and comics.

One of the stand out tracks on 'Drunk' is "Drink Dat" featuring Wiz Khalifa, but not necessarily because it is the best track. It stands out, almost literally, because it sounds so different to the rest of the album. Thundercat sings the catchy chorus here singing “Can’t open my eyes, girl, cause I’m just to wasted.” Wiz Khalifa has some great verses here, which make the track not so much a party anthem, nor an after-party song but more a song for those odd times when everyone is pretty drunk, everywhere is closing down for the night but you still feel like the party has not started yet and thus keep it going.

"3AM" feels like a nice follow up to "Drink Dat" despite not coming directly after it. "3AM" is a short track about being sleepless at 3AM, often a result of said nights out in "Drink Dat".

The strange and quirky nature of the album even extends to the track names, with titles such as "Captain Stupido", "I Am Crazy" and "Rabbit Ho". There is also references to being drunk, throwing back to the album title, with names such as "Drink Dat", "The Turn Down", "Drunk" and "DUI" (Driving Under the Influence).

Despite the big name features, the beats and instrumental aspects take precedence here. Whilst they do offer some sanity to the album, even without their features the album is an outstanding listen. 'Drunk' is an album that is hard to describe. It is weird, wonderful, funky, jazzy, dark, serious, funny and just about any adjective you can think of all at once. It is something both easily understandable and incomprehensible. You enter the rabbit hole the first time and experience one thing but the second time it is not the same. You hear something different on each listen, pick up on a little sound effect here and interpret something differently there. One of the only things you can be certain about is that Thundercat transports you out of your mind and into another world. Where that world is, well, I do not even think Thundercat could tell you that.

There is so much intriguing and worth mentioning about 'Drunk' that it is hard to feel like you are doing a disservice to it by mentioning every collaborator, every fun little lyric and sound effect and everything else that is in there. But, just like getting drunk, it is a lot more fun to experience it yourself and be a part of all the little quirks and fun moments included in it rather than to just read about it. So take a deep breath and dive into that rabbit ho’. 'Drunk' is out now.