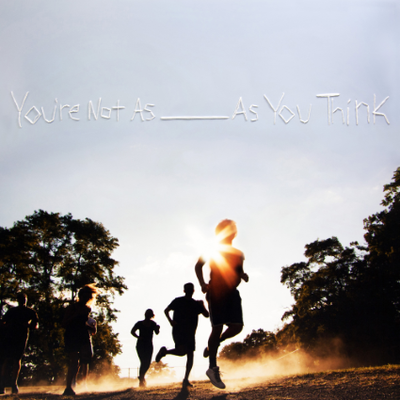 Hartford Connecticut’s Sorority Noise are releasing their third album ‘You're Not As ____ As You Think’ and it is something very special indeed. Their songs seem to deal with life and all the problems that living brings us. But it is not done in any kind of depressing way. In spite of some of the dark subjects, losing friends to heroin for example, the songs are mostly uplifting. I felt influences of Jonathan Richman and the Eels on this record. “Second Letter From Saint Julie” deals with loss and the angst around religion and whether there is a God and is currently my favourite song on the album. The line “It gets pretty cold when, at 23 years old, you’ve been running from death your whole life,” is an unforgettable one from “Where Are You?”

The band formed in 2013 and consists of Cameron Boucher singer and guitarist, Adam Ackerman on guitar and vocals, Ryan McKenna on bass and vocals and last but not least drummer Charlie Singer who despite his name does not provide any vocals. They are at their most Mark Everett inspired on “Leave The Fan On” which tackles the awful curse of cancer. The lo-fi and very emo “New Room” brings the album to a sad and chilled out close. The ending is in deep contrast to the rocking and punky “No Halo” which gives a massive power pop curtain opener to the set. If you like the Strokes you will love “No Halo" which is also the lead single from this marvellous collection of the sublime from Sorority Noise.

I have listened to the record three times as I write this review and the stand out song on my first run through was “A Better Sun”. It is a great song with some very skillful but minimal production. I hope to see this bunch live sometime soon as I reckon the emotion in these windows into a life well lived will truly come alive. I love getting the chance to review albums, especially from bands and artists that I have not come across before. Every so often, as with Sorority Noise, I feel like I have unearthed a new musical treasure. Their US tour starts on March 18th and runs until May 14th, then they are in Europe for eight dates followed by a further five US dates. I urge you to buy, download or stream this album and to check out the band’s back catalogue. On top of that if they are playing in your town or somewhere nearby you would be foolish to miss them!