Coco Proves That Hames Is Where The Heart Is! 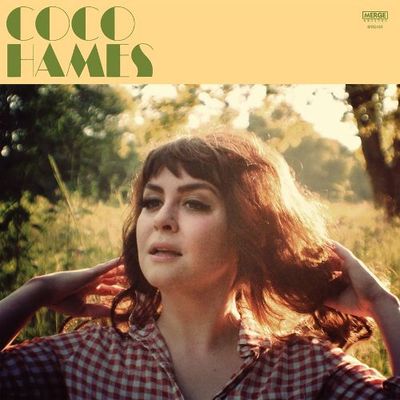 Lindsay ‘Coco’ Hames is one third of Nashville based garage rockers the Ettes who have released five albums. Coco was also a member of the Parting Gifts who released one album in 2010. Coco is clearly not someone who can spend time sitting around doing nothing as she is now ready to launch her first solo album into the world. The record is self-titled and, you guessed it, is called ‘Coco Hames’ and Merge Records have it lined up for release on 31st March. If you love your rock old school and classic then there is something on this collection that will stimulate your musical taste buds for sure.

But it is not just a classic rock album, although there are a lot of old school influences. There is a freshness injected from a modern Nashville sound, which I believe is where this gorgeous little collection was recorded. I can sense many influences from sixties greats like the Mamas and Papas and the Byrds especially in some of the jangly country rock guitar lines and beautiful vocal harmonies. Overlay that with a seventies Fleetwood Mac feel on some tracks. There is also a great modern country feel, especially on “Tennessee Hollow” which I reckon Loretta Lynn would do proud. “This House Ain’t A Home” could have come from the classic country and western canon, but it is a Hames original as are nine of the ten tracks.

There might not be much in the way of garage rock here, go and listen to the Ettes for that. However “I Don’t Wanna Go” is a driving, pulsing rocker which reminded me just a little of the Pretenders. Coco Hames shows her love of sixties girl groups on the haunting slice of pop “I Do Love You” the slight hesitancy in the vocal adds to the sultry and soulful feel in evidence throughout but especially on that song. The Doorsy organ sounds on “If You Ain’t Mine” gives the tune an unworldly, ethereal feel that works really well. The only cover on the record is a fabulous Replacements song that was written by Tommy Stinson, “Tiny Pieces”. It fits so well that it doesn’t feel like a cover version at all. Perhaps my favourite song on this album after two listens is the closing track “Dead River”. It is a haunting and sparsely produced song which I can imagine playing in the Roadhouse Bar in Twin Peaks. This is a brilliant album that grows on you more with each listen. I know that I will be playing it a lot in the next few months.