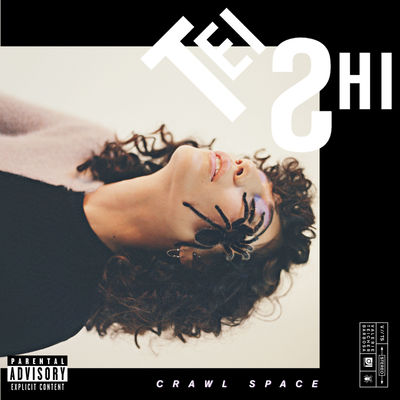 Tei Shi, or as her parents know her Valerie Teicher, is an Argentinian singer songwriter who is now based in Brooklyn. Her sophisticated soulful take on modern R&B belies her age, she was born in 1990. Tei Shi has released a handful of singles and EPs since 2013 and has sung with the magnificent Glass Animals (on “Holiest” back in 2014) as well as recording a rather splendid cover of Beyoncé’s “No Angels”. Next week she gives us ‘Crawl Space’ her first album and it is something quite unique, very original pop that is nicely distanced from the formulaic approach of much of today's chart fodder. Her influences are broad and the places that she has lived may have helped in that regard. Born in Buenos Aires she has also spent time in Bogota, Vancouver and Quebec.

The album opens with a strange spoken word piece entitled “Way To Record” which features an almost falsetto style childish voice (Tei Shi?) speaking about how to record using a cassette player, very weird and almost unsettling, but it does not detract from the album at all it simply adds even more character to it. As do the other two rather amusing spoken word segments; “Bad Singer” and “Bad Girl”. Many of the songs could feature as an integral part of one of the better chill-out compilation albums or even a running/exercise playlist, notably “Keep On Running”. There is a track on here called “Creep” and I so wanted it to be a cover of Radiohead’s first hit, sadly it isn’t but it is a fabulous tune. But it got me thinking that Tei Shi would be a brilliant candidate to cover something from Radiohead, how about it Ms Teicher?

I get a kind of Kate Bush does R&B club thing on some songs, especially “Say You Do” which feels reminiscent of Kate’s work with Prince in the early 90s. My favourite track after two spins of this record (speaking metaphorically as I reviewed from an MP3 download, but if the record company would like to send me vinyl copy I wouldn’t complain!) is “How Far”. But then the warped disco of “Justify” wraps itself around you like an earworm on steroids or a pop Boa Constrictor. Her vocal range could rival Minnie Riperton at the high end, especially on “Lift Me”. My advice to you is to check out ‘Crawl Space’ now, before everyone else gets to it. Go on you know you want to be first on your block to love this album!