Run The Jewels & The Gig To End All Gigs 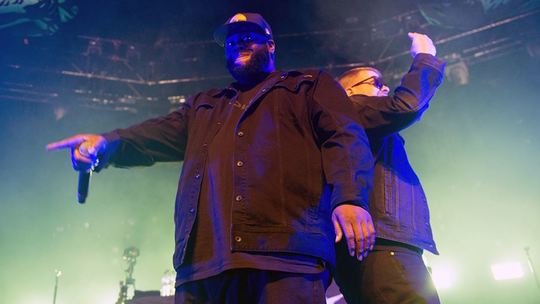 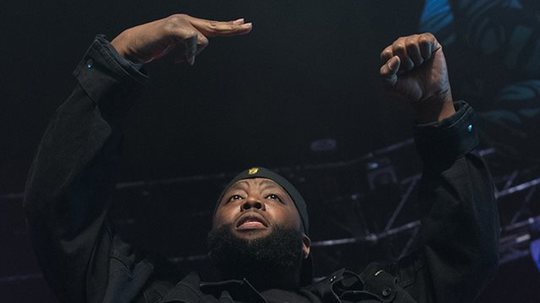 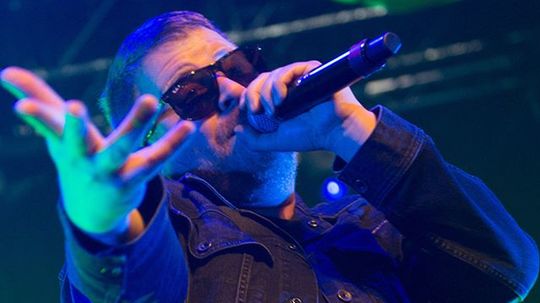 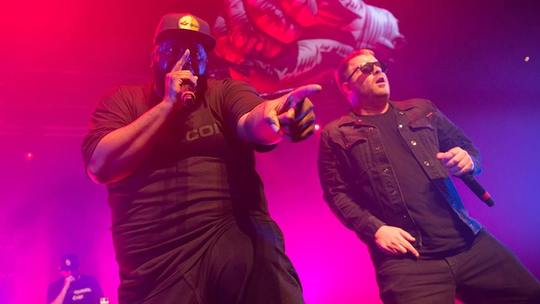 Picture this, I’m a bag of uncontainable excitement and I’m stepping into the wide open space of the Roundhouse on a Saturday night to see the legends Killer Mike and El-P on the London date of their Run the World tour. Ever since the video of their collaboration with DJ Shadow went epidemic on various social media channels and I learnt the words to ‘Nobody Speak’ back to front and inside out, and performed them in my best estuary Essex accent to anyone who would listen, I’ve been desperate to see Run The Jewels play live. The two of them fit together so perfectly, like two pieces of a gleamingly golden interlocking heart locket, like a nut tightened securely onto a bolt, like two sides of the same coin. They really are the new peanut butter and jelly (that’s jam, by the way, for all you non-Americans…)

Anyway, seems I was not the only one leaping around like a kid who’s had too many chocolate coins and jelly beans before 7am on Christmas morning. The entire floor was buzzing with animated chatter and any small spaces were quickly filled. Support for the evening was from The Gaslamp Killer who bounced off the energy of the crowd and hyped and heightened to the highest levels. Wild and feral and full of acid tinged hip hop funk, Mr Lamp emitted a maniacal stage presence of pure joie de vivre. At times throughout his too short set, it seemed almost as if he was lost inside a video game and we, the audience, became the characters on his screen, as he leapt through a series of light and sound adventures, blasting and bleeping us with his controller. The Gaslamp Killer is definitely one of the most vibrant and enthusiastic transmitters of excellence that I’ve seen in a long time.

With everyone fully warmed up and most people around me starting to shed layers of clothing, in sync with G L K who had swiftly disrobed down to his vest during his set, it was time for a very quick breather before the lights dimmed again and the giant hand shapes (pistol & fist of course) suspended from the ceiling glowed in readiness. The sounds of ‘We Are The Champions’ reverberated through the air and DJ Trackstar, El-P and Killer Mike sauntered nonchalantly on stage. And from start through to emotional finish, we, the crowd, and the genial pair up there, merged as one through waves of lyrical virtuosity and beats that demanded movement.

Beginning with material from their most recent Run the Jewels 3 album and then swaggering through many of their best known tracks, their 75 minute set didn’t fail to fulfil my expectations. Killer Mike’s easy inflection, his shoulders lifting with each lilt, and his genuinely blissful looking smile was a joy to witness. This man has quiet authority in droves and a delivery of substance and significance. El-P alongside with his rap mastery and his laidback, breezy and buoyant style, spitting out lines like this was what he was born to do. Together, this pair have the power to blow Camden to bits, and they do just that.

My initial excitement during ‘Talk To Me’ builds to feverish levels during ‘Legend Has It’ and at times the exuberance all around becomes explosive; drinks flying, bodies surfing overhead across to security, and forceful surges of the crowd moving forward and back as one. El-P stills the storm with that trademark fist and gun salute, which quells things a little as all hands match his. And as a circle opens up in the middle of the floor, Killer Mike has it all under his watchful eye and commands that people are kind and if someone near you falls, then you “pick them up”.

‘Nobody Speak’ blew me away, as I knew it would, and the collective euphoria surrounding me reaffirmed my love for this track. The throbbing beats of ‘Call Ticketron’ thundered by like a horse without its rider, lost to its own rhythm. Another standout moment was ‘A Report To The Shareholders’ which left me mesmerised, totally awestruck and missing within a single moment. ‘Close Your Eyes (And Count To Fuck)’ just bounced hard, ricocheted, rebounded, and probably somewhere a million miles away a field full of flowers simultaneously shed their petals. Then Killer Mike made his killer move, with a speech designed to unify and inspire. I don’t remember all the words, because by that point I was totally full of sounds and full of love, but I remember the emotion and the kindness that was conveyed. The message was of unity and compassion, empathy with our fellow humans with whom we share this world. And everybody in that room got it.

The night closed with ‘Down’ and a few thousand very happy people spilling out into the streets of London. My final words on Run The Jewels at the Roundhouse? I was there. And I’m not sure I’ll ever be anywhere better. Catch them if you can at Field Day festival in June.