More Than Echoes Of A Legend 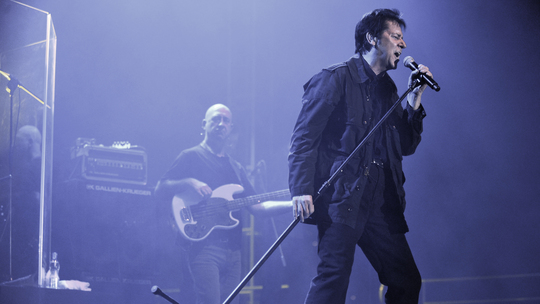 I went to the Churchill Theatre Bromley with a mixture of trepidation and expectation. Having been a massive fan of Shakin Stevens during the 80s I knew that a tour was an opportunity not to be missed, but I must admit I was a little worried that perhaps he wouldn’t really be able to cut it live any more.

My first pleasant surprise of the night was Shaky’s support act, a country influenced singer/songwriter by the name of Danni Nicholls. I’d never come across her music before, so like most of the audience had little idea what to expect. The first song, 'Long Road Home', was a country song about Bedford! That’s not a line I ever thought I’d write in a review! It was her voice that immediately impressed, clear, unforced and alternately strong and tender. She mentioned in her set that she grew up listening to country music and there were definitely hints of Patsy Cline in there. Initially she seemed a little uncertain as to how the audience would take to her, but the reaction to ‘Beautiful Game’ settled any nerves she might have had as she played an increasingly confident set and got some of the audience singing along on ‘Where the Blue Train goes’. By the end she showed herself to be a talented lyricist, excellent singer and an artist who connects very well to her audience. I hope she goes on to further success because she really deserves it.

Shaky is touring in support of his recent album ‘Echoes of our Times’. The first thing to say about the album is that it shows off a completely different side of his singing and song writing. It was inspired by his research in to his family history and blends rock, blues and gospel in an album that constantly delights and surprises. I would urge you to check it out as, for me, it’s on a par with the late career reinvention of Johnny Cash and cries out for Shaky’s critical re-evaluation. The opening track of the album, ‘Down in the Hole’ provided the opening song of his set. On the record it’s a very powerful song, and one that would test many singers younger than Shakin Stevens, but he absolutely blew it apart live. The voice, in many older singers, not only loses its power but also its range, but Shaky still has both in abundance. When he reached the end of that song there was a huge cheer from the audience who knew that not only could he still cut it live, but that he was a match for anyone vocally.

After that we settled in, and occasionally danced along, with a night of pure entertainment. He mixed tracks from the album with his extensive back catalogue. I would be here for ages picking out highlights from the set, but his first single ‘Hot Dog’ together with the follow-up ‘Marie Marie’ showed that he could still reach the high notes and popular album track ‘Turning Away’ showcased his still intact melodic skills. Other album tracks that really impressed were ‘Fire in the Blood’, a song about his grandmother and ‘Suffer Little Children’ a heartrending and beautiful song that would be a highlight in any set. All of the ‘Echoes of our Times’ tracks had their own videos projected on to the stage and they were without exception very well done. In the second half of his set, an excellent cover of ‘Have you ever seen the Rain’ was very well received along with a cleverly reworked version of ‘This Ole House’ and a rocking ‘Green Door’, where he showed off his moves, during the encore.

Shakin Stevens is still a great singer, showman and dancer, even if the famous knee drops are no longer in evidence! I don’t think he has a painting up in the attic so much as a full body double! Can I be the first to call for Shakin Stevens to get the next available ‘Legends’ slot’ at Glastonbury?!