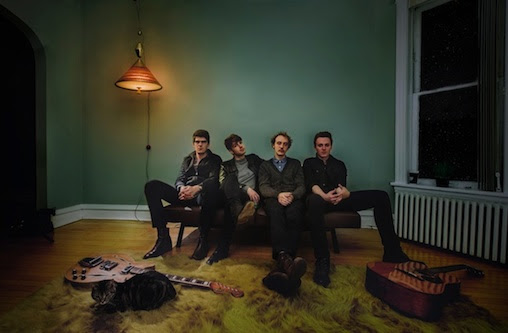 Having slimmed down to a four piece, Secret Colours continue to plough their psychedelic furrow across 2 EPs this spring,
Positive Distractions, Parts I & II. Part I has already arrived with the sequel turning up in late April, at which point a physical release (on vinyl and cassette) will combine them in to what is effectively the band’s third album. Across twelve tracks they party like it’s 1968 with nods to bands from The Creation to Blossom Toes. Opening 1-2 sucker punch
City Slicker and new single
It Can’t Be Simple set out their stall with a lean, taught sound at once both modern and retro.
Get to the Sun perhaps the albums centre piece is an anthem which will go down a storm from festivals to club gigs, almost Stones Roses-esque and worthy of greater exposure, it demonstrates a significant talent at work both compositionally and from a performance perspective. Like almost all psych revival acts however, there are moments when it slips into pastiche –
Mrs Bell is more Herman’s Hermits than Barrett era Floyd but when it’s good, it transcends its influences and offers something rather special. If there is a criticism it’s that it’s a bit of a game of two halves stylistically, with Part II offering a more whimsical and almost Merseybeat feel in parts. As two separate releases that makes sense but as a single album it perhaps needs re-sequencing to truly deliver on its potential. Having said that it still demonstrates a step forward from previous albums and should go some way to broadening the bands fan base. Part II is being released on April 29
th, to coincide with their appearance at Austin’s Psych fest. Part I is available now for download via the bands website (secretcolours.com). Recommended.