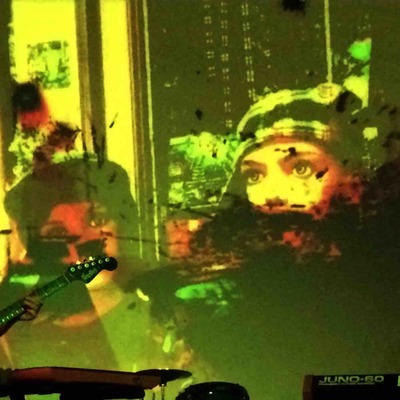 I recently learned about Boston-based Dyr Faser through a friend and was really impressed. While their whole forthcoming ‘Trio’ EP is a worthy listen, I totally got lost in what I think is the standout track of the EP. This is not their latest release - there has actually been a string of them released since this one came out in the latter half of 2017 as the band have apparently been really busy and even embarked on a European and US East Coast tour in that time window.

While all the tracks are rather distinguished from one another, they can be described as entrancing, hypnotic, dreamy, kraut-rockish.... they can even be called meditative in that trance-inducing way as you stand in the middle of the night club staring at them on stage kind of way.

‘Estranged’ is the second track from the EP but the lead single and I think this was a good choice. Simply put, this is mysterious melancholic kraut-infused trance. Electronic, phased-out beats wind and pulsate as a backdrop to some impeccable slide guitar action and synth ambiance.

Combining space rock and post-punk with the Southern twang element in 80s indie rock characteristic of bands like the Hoodoo Gurus, they are creating original dark soundscapes without all the gloom so many ‘dark’ bands are notorious for. In this case, this feels like a sonic soliloquy designed for clarity of mind.

Led by Eric Boomhower, Dyr Faser is a trio - Katherine 'Kate' Murray is on synth and Thalia Zedek adds her characteristic Southern slide gracing. You may remember her as a member of Live Skull and Come (together with Codeine's Chris Brokaw).

Eric Boomhower, the band's mainstay (as proven by a mixup of the band members in the releases following this one), says "We made this record after years of Thalia and I supporting each other's music. As one time housemates, we talked about music a lot. And unbelievably, I found Kate who shared a love for Krautrock and space rock."

This is one convincing positive vibing alternative trance hybrid EP and I look forward to hearing the ones that follow, hoping they offer the same kind of high.