REVIEW gig Furnace And The Fundamantals The Portland Arms, Cambridge 23/08/17

Furnace And The Fundamentals @ The Portland Arms 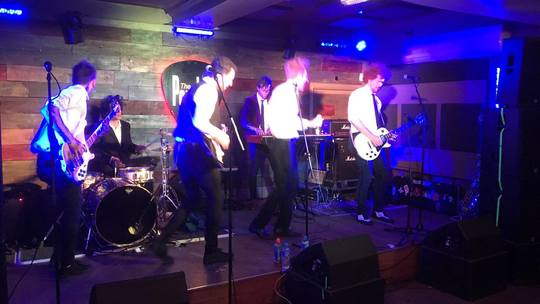 If only Cambridge knew what was going to hit them when Australian cover band, Furnace and The Fundamentals came to town, gracing the stage of the recently refurbished Portland Arms, one of the city’s premier live music venues.

If somebody said to you, ‘let’s go see a cover band tonight’ – most people would probably turn down the offer, being put off with the thought that you’re likely to encounter some kind of wedding band poorly attempting to emulate the likes of Aerosmith or AC/DC. This is certainly not the case when it comes to the high-energy antics and endless hits performed by Furnace and The Fundamentals.

All dressed in their best suits and ties (plus a very jazzy red glitter jacket worn by front-man, Furnace), the Sydney based 6 piece embarked on a non-stop party train of classic pop and rock anthems from across the decades. A few songs in, you’re beginning to wonder whether the band are actually going to stop for a rest, with each song blending seamlessly into the next thanks to the expert arrangement work. For instance, ‘I Was Made For Lovin’ You’ by glam-rockers KISS, shifted unusually, yet flawlessly into an Adele medley, before moving swiftly on to ‘Blurred Lines’ and ‘Billie Jean’, before topping off a floor-filling night of dancing with an impeccably rehearsed version of arguably the best rock song of all time, ‘Bohemian Rhapsody’.

These guys are more than just musicians; they’re athletes! It must have been at least 20 mins of continuous singalong bangers before they even stopped to catch a breath. But the synchronized dance moves, syncopating backing vocals and general tomfoolery were not restricted to the Portland’s modest stage as gig-goers were joined by the band on the floor as they did the conga through the crowd and keyboard master, Lachlan Nicholson, knocked out a killer keytar solo. Whilst drummer, Mike Solo, was confined to the corner of the stage, he still managed to add his two cents to the performance antics with stick spins, cross-handed drumming and some ingenious trills and transitions that hold the mash-ups together like superglue.

Highlights included the liveliest rendition of ‘Rock The Casbah’ before Paul Simon’s ‘You Can Call Me Al’ got more feet moving but the band then took things down a notch with a smooth, sexy and sultry cover of Ginuwine’s ‘Pony’.

In some ways, it seemed like The Portland didn’t do justice to the quality musicianship and performance on show, with it struggling to keep a lid on the seemingly unlimited supplies of energy from every member of the band. These guys deserve to be playing bigger venues, packing out tour dates, day in, day out – because if everyone knew that cover bands could be like this, there wouldn’t be the stigma that is usually associated with them. Nonetheless, the lucky Cambridge crowd were treated to an intimate, no-holds-barred performance that proved that Furnace and Fundamentals are the ultimate party starters – full stop.