Don't Judge An EP By It's Cover, This Deserves To Be Award-Winning Material 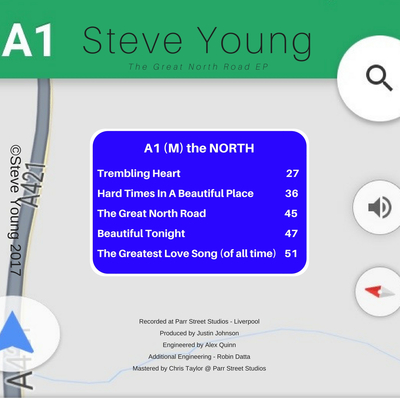 Steve Young aptly named his 2016 debut album 'Troubadour'. Having spent his formative years in an array of bands, he made his name as a professional musician and played alongside Darren Hayes, Peter Andre and even Tulisa! But while he earned his bread and butter playing for popstars great and small, Steve still carried a torch in his heart with flames fueled by ambitions. This culminated in one of the most compelling but criminally overlooked debuts of last year.

However, there were those that took note. From Caffe Nero, who took him on the road around the country and highlighted his music as 'artist of the month', through to Bob Harris who gave him much-needed Radio 2 love. Thankfully this nourishing support ensured that this wonderful song-smith did not give up his solo dreams in favour of the possibly more financially fruitful route that had paved his journey thus far.

As he returns with the Justin Johnson produced 'The Great North Road' EP, which features artist-du-jour Laura Oakes. Steve Young abandons the DIY sound of his debut for a much larger, ambitious and dare we say it, radio friendly finish.

This is no bad thing of course. Artists need to have dreams and to fulfill them they need to give mainstream media what they require. However, while lesser artists would have lost themselves in the mix, this actually feels like Steve has finally arrived at his fullest potential.

With 'Trembling Heart' and 'Beautiful Tonight' screaming out for Chris Evans and Graham Norton to play them on their shows, it is the touching closer 'The Greatest Love Song (Of All Time)' that will have your heart all a flutter.