The Moods Light Up Manchester At Homecoming O2 Ritz Gig 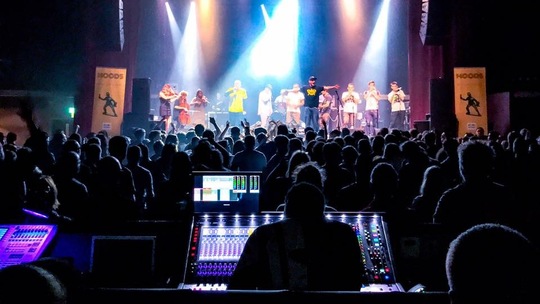 There was a big lead-up to the night after The Moods had toured up and down the country this summer earning rave reviews everywhere they went. Excitement was in the air, there was a buzz, an energy, something special was about the happen.

The Moods drifted on stage with an eye opening first track; violins, banging bass drums and heart melting vocals reminiscent of a Faithless dub-step vibe which lifted the crowds up off their feet.

They swiftly moved onto some hard hitting rap, hip hop tracks, amazing us with tight flows and politically driven lyrics to make us think and unite us.

The raw flawless energy of 'Explicit' just grabs you, whilst the coolly toned flow of 'Kolega' hits you with hooks and bars second to none, Mark Cunny's emphatic vocals on 'Keep Your Powder Dry' kept us raving mid-set with dark meaningful content.

The stage lit up as Johnny Oz lead the mighty successful single 'Joy', we were in awe, the crowd belted back the words and danced along with passion, these guys really know how to pump up an audience.

Without enough genres on show from the 10 piece strong band (I think 13 on the night) The Moods finished the night with a funky jazzy hit with trumpets at the forefront to top off a perfect performance and night from the hottest band around right now.

These guys will surly go on to great things, check them out. #iamamood