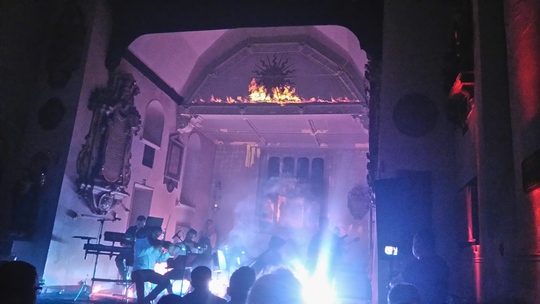 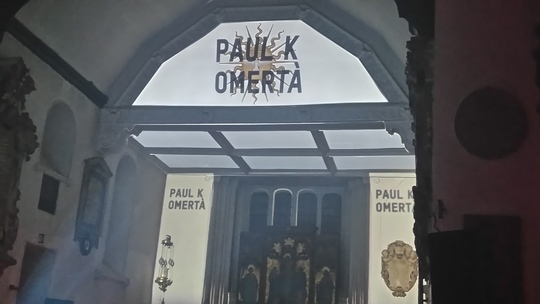 When I first heard and reviewed Paul K’s 'Omerta' album I thought it would lend itself very well to a live performance. What I wasn’t expecting was for it to take place in a church. Paul explained that, given the concept of the album, it was the perfect place. 'Omerta' is the soundtrack to an, as yet, unmade film dealing with the descent into sin of a priest. St Pancras Old Church is a beautiful place with the acoustics you would expect, but it is small creating a lovely intimate setting for the music, especially with the light from flickering candles and a sympathetically muted lighting rig.

For me, a really good concert requires a really good support act. Fortunately, we had an excellent support act in Corinna Jane, a very talented singer/songwriter. Her voice was absolutely mesmerising throughout her half hour set moving effortlessly from breathy vulnerability to swooping high notes that sent the hairs up on the back of my neck.

‘The Train’ was an excellent song which reminded me of ‘The Wicker Man’ soundtrack. Corinna’s voice reminded me of Eddi Reader of Fairground Attraction on the song, ‘Three Faces of You’. On Echoes of my Mind she channeled early Kate Bush with her superb piano playing and the crystal clear notes that were enhanced by the marvellous acoustics.

Other songs that stood out were ‘The Flood’, a powerful and uplifting song that showcased her vocal range and ‘Pour me a glass of Tomorrow’. A number of her songs seemed to be about disconnection but they certainly connected with the audience. Corinna Jane is definitely an artist who deserves to be better known, so look her up online or go to her shows if want to see a genuine talent just waiting to be discovered.

When 'Omerta' started, it was with a recording of the Intro from the original album. The track was accompanied by a video which became an increasingly important part of the show as the evening wore on, giving an insight in to the priest’s story as it developed. It not only added a great visual dynamic, it also knitted together the pieces of music in to a coherent whole. The first live track ‘I Fideli’ exploded from the stage with the drums and electric guitar giving it a completely different sound to that of the album. It was a visceral experience that completely transformed the songs, giving them a sense of power.

A number of tracks induced a sense of unease I had only previously found on the Vangelis masterpiece ‘Heaven and Hell’. Paul Kirkpatrick himself played the synth which was the base that allowed the other parts of the onstage orchestra of violins, cellos and bass guitar to come in to their own at various points during the evening. Corinna Jane came back on stage for ‘Apparition’ and ‘Isolation’, my favourite track, giving real depth and power to the soundscape that characterises 'Omerta' throughout. Paul K did move away from the 'Omerta' album to invite the string section to play Max Richter’s ‘On the Nature of Daylight’. Max Richter is not an artist I had come across before but if that gorgeous track is anything to go by, certainly one I should search out. The only sour note, particularly noticeably during that lovely track, was the self-indulgent chatting amongst members of the audience which would be drowned out in a rock concert but which was really off-putting at times.

The following track ‘Ecce Homo’ would have been at home on any of the best Pink Floyd albums. When the final chords of the final track had faded away I had changed and deepened my relationship with the album in a way that only the live experience could have engendered. Paul K is a genuine polymath, an artist who can work visually or aurally, an artist with a genuine vision that he is confident enough to share and one who can engage your heart and your brain with equal skill.