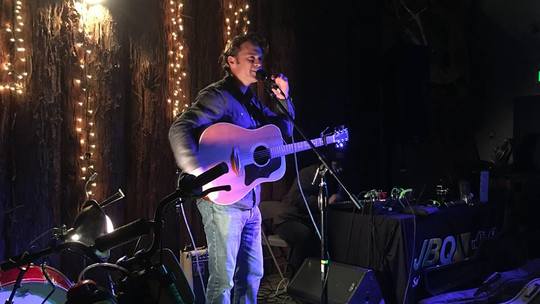 Shaw’s grateful and down to earth personality rings true in every word he spoke and his audience is faithful, with a diverse age range attending the shows, or at least that was the case at the recent Santa Cruz gig.

As for his new album 'Felt', the name of the album is appropriate. Shaw has endured a lot of changes and took some big chances to be where he is today. A few years ago, Shaw took a vacation from his job in high finance, leaving NYC to visit his sister in San Francisco where he rediscovered his love for songwriting and called up in his boss in New York and gave his notice. He settled in Santa Cruz, CA and began writing and recording music.

He recently released his first full-length album, titled 'Felt'. He celebrated the release with a standing room only and heartfelt performance at Kuumbwa Jazz in front of family, friends and hometown fans.

Shaw’s songs are truthful, tender and filed with sweet melody. His charming sound earned him the spot as Good Times Magazine Best Local Musician in 2016. Shaw delivered both dynamic driven songs and mellow tunes that cover a range of emotions. Lyrically, Adams makes some incredibly statements and tells some heartwarming stories.

While his emotional arrangements and lyrics are on a par with someone like Elliott Smith or Jeff Buckley. Adams shows a sort of rock n’ roll attitude in his playing but it’s clear there is a sensitive artist inside him. So, in his live performance you get the best of both worlds. If you missed the show, it’s not too late to purchase the new album 'Felt' and add seeing him soon to your bucket list of great performances to catch.