Sarah Rogo Lights Up The Room At California's Canyon Club 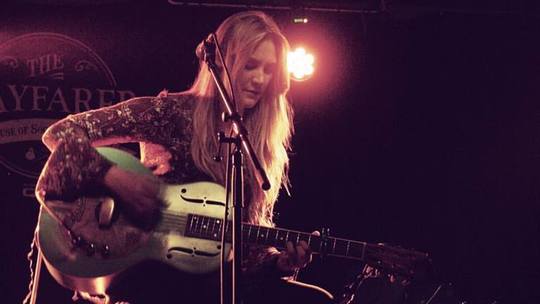 San Diego is one of those kinds of cities that allows an individual to fully express themselves. As a city, it thrives in laid back life and creativity. Sarah Rogo left the cold of the east coast behind a few years ago and moved to San Diego, “Where the Weather Suits Her Soul", claims the artist and songwriter inside her.

Rogo delivered a kick-ass 6-song set at the Canyon Club in Agoura, CA this past weekend, she was the opening act for lifers Pablo Cruise but she quickly and almost without effort won over the crowd. Rogo delivered a solid mixture of the blues, with a lil' rock, soul, folk and Americana flavor thrown in. Her original songs float between confessional numbers, soulful, blues rockers and emotional ballads.

At the ripe age of 24 Rogo has the confidence of a seasoned performer and carries herself and her guitar with ease. Her voice is sweet and powerful and she plays the blues as if she’s channeling one of the originals, but as folklore tells us the old blues men sold their souls to the devil, but Rogo’s voice and sweet smile tell us she is more of a blues angel than anything else.

Her original songs are good, and you can hear in every word she sings that this young woman will grow into a songwriter to contend with. She played a couple cover songs too, but if you didn’t know better you would have thought they were her songs… because she owns it with every note.

Her between song banter is endearing and when she sings she melodically navigates through the darkness of heartbreak and the light of love. Showcasing a modern, yet timeworn songwriting approach and rustic yet soothing and angelic voice. Folky, bluesy and filed with soulful honesty.