The Los Angeles County Fair is an annual county fair. It was first held on October 17, 1922, and ran for five days... 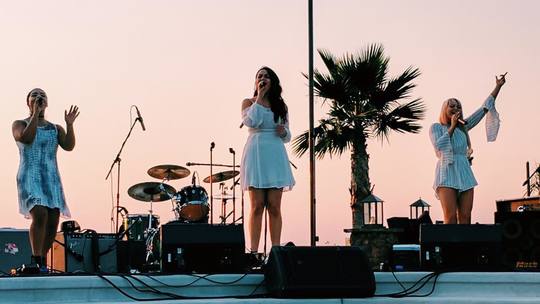 Three little ladies on the Kickin’ Country side-stage of the LA County Fair this past weekend won over the crowds with their soaring vocals and undeniable talent.
What mainstage?? Who cares who's playing on that big stage just a few yards away when the side stage with hay bales for seats is showcasing so much talent.

Alicia, Paxton & Kristen aka Auburn Road delivered song after song of pure fun in the form of beautiful 3-part harmonies and charming between song banter. The girls, we are told are 17, 18 and 19 years old and have been performing together for a few years already, but it was when they met their manager and producer Michael Anderson things started to fall into place and their sound was refined.

They performed a 5-day run, with 4 sets a day at the LA County Fair and any fair goer that was lucky enough to stumble upon them will have the pleasure of saying in the very near future “I saw them play a small stage” because these girls are on their way to the big time, big festivals, big arenas and big fun.

They played a mixture of originals, from both their 2016 EP 'Fancy' and their upcoming releases 'Mustang Volume 1 & 2', their original songs float between soul baring empowering numbers and honky-tonk yet soulful, even bluesy emotional ballads. They covered songs like Maren Morris’ 'My Church' and Dolly Parton’s 'Jolene' and I think it’s safe to say had the ladies been in the audience they would have been proud.

Barely out of high school and these 3 have the confidence of performers who have been doing it twice as long, they are little ladies with powerhouse vocals and voices that are chill worthy. Auburn Road is in the midst of a PledgeMusic crowd-funded project for their upcoming EP series 'Mustang 1 & 2', if you want to be part of the journey go to PledgeMusic/AuburnRoad for more information.

Something big is going to happen for these three, talent like theirs can’t be denied.