Micko and The Mellotronics At The Fiddler's Elbow 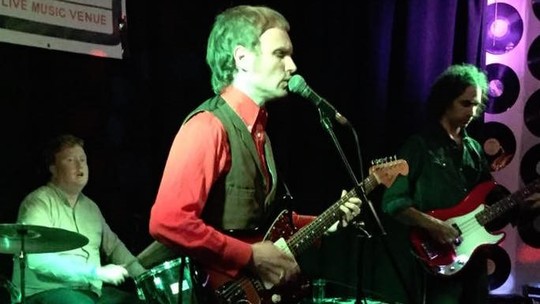 A sense of 'full circle' permeates this review both in the musical and biographical sense. In 1997, this writer was an extra in Todd Haynes' celluloid Glam Rock extravaganza, 'Velvet Goldmine'. The eponymous frontman of The Mellotronics - the polymath Micko Westmoreland was also in said film, having the eloquent supporting role of 'Jack Fairy'. A dreamy slender Brian Eno-like figure. But that is another story, and now belongs in reverential Brit Flick history.

Here in this spit 'n' sawdust venue - a stone's throw away from the now generic hubbub of Camden Town. We are distinctly reminded in a 'short sharp shock' sense of what inspired the now 40-something Micko to divert from his electronic music leanings (he has composed film scores) and unashamedly pay homage to the musical heroes that inspired him to pick up a guitar in the first place.

The band in question is a no-frills three piece in the template of The Jam and the early Cure. Micko - looking very dapper in vintage Doctor Who style threads - plays Fender Jaguar and sings. Brian Pistolesi is the bassist and Nick Mackay is on drums.

Starting off in an arresting Stooges-like vein, they immediately invite you into their barre-chorded wind tunnel of excellence. 'Sick and Tired' is a downbeat number which certainly channels the intense '77-style facial contortions of MW. 'The Facts of Life' has a great rhythmic sci-fi sounding break. Well into the set, you do get a strong sense of the darkness closing in amid the 'Paint It, Black' vibe of 'Freaksville' (the video reminds me of The Banshees' 'Happy House'). When Micko sings, "I want to get back to Freaksville", you sense he craves a perennial womb-like existence. Definitely convincing.
'What do You Bring to the Party?' is festooned with excellent spidery guitar pickings, and 'The Finger' takes on an an unexpected twist - an instrumental beak a la The Supremes' 'You Can't Hurry Love'. I am left gobsmacked by such eclecticism.

The gig - which ends with the tongue-in-cheek shoplifting opus' Schmescos' - is barely an hour long. But in the grand scheme of things, that's fine. Long gigs usually leave you clock-watching anyway.

Micko has expressed his admiration for artistes as wide-ranging as Jacques Brel, Syd Barrett, Miles Davis and The Silver Apples. Such appreciation is very admirable within the challenging constraints of a three-piece. Micko told me that, pre-gig.

Long may he continue in his current incarnation.