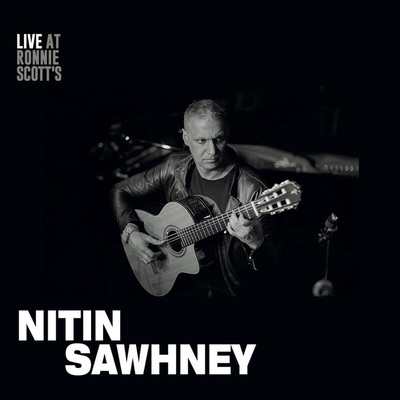 The ‘Live at Ronnie Scott’s’ album from musical genius Nitin Sawhney starts with the gorgeous song ‘Sunset’ from his ‘Prophesy’ album. Despite being 16 years old it sounds incredibly fresh as the trademark fusion of cultural influences weaves a spell over the listener. Nicki Wells’ voice is mesmerising throughout the track and it gets the album off to an incredibly strong start.

Next, the lyrically coruscating ‘Dark Day’ from his most recent studio album ‘Dystopian Dream’ is given a fantastic vocal courtesy of Eva Stone who regularly brings a touch of magic to the live performances. ‘Redshift’, also from his most recent album, gets a suitably jazzy treatment that is gorgeous to listen to.

‘Homelands’ goes back to ‘Beyond Skin’ released in 1999 and it is quite amazing to hear the musical maturity and the early dexterity Sawhney showed when mixing from his palette of influences. In many ways, ‘Homelands’ shows why his music has struck such a chord with so many people with its rhythm and tempo constantly changing but never jarring, use of different instruments and the way that the chosen voices add the final musical colour to this musical landscape.

‘Henrecia Latina’ is carried along by a flamenco guitar that really showcases Sawhney’s virtuoso style and the way he can write for any instrument that comes his way, ancient or modern or anything inbetween.

It is unusual in a sense for Sawhney to take centre stage either live or on his albums. He gives nearly all the best elements to his collaborators, one of the main reasons why so many people have wanted to work with him over the years. When I was lucky enough to see him live he stayed in the background for most of the songs, but his self-effacing style masks the genius he possesses in writing and arranging songs that allows him to draw out such incredible performances from those around him.

At this point it’s only fair to complement the sterling work put in by Eric Appopoulay on guitar and Ian Boudge on cello. Like Sawhney their work may be less showy but it is absolutely vital in building the fantastic sound.

‘Tere Khyal’ is a beautiful song that washes over the listener. The highlight of this set, for me, is ‘The Conference’ with its impossibly fast call and response in Hindi and then Aref Durvesh’s tabla challenging Sawhney’s keyboard. Live it just carries the audience along with it, clapping and laughing after the deadpan introduction that encourages them to sing along once they pick it up!

‘Breathing Light’ has a totally different feel thanks to Ashwin Srinivasan’s beautiful playing of the Bansuri flute. The penultimate track ‘Nadia’ dips back in to 1999’s ‘Beyond Skin’ with Nicki Wells once again sending the hairs up on the back of the listener’s neck alongside Srinivasan who once again takes centre stage instrumentally.

Finally, Sawhney goes back to the beginning with ‘River Pulse’ from his debut album ‘Migration’ which is remarkably over 20 years old now. The ability of Nitin Sawhney was already evident in this early track and he has built on this year after year to become one of the most important musicians that this country has produced in the last 50 years.

It probably doesn’t bother him that he’s not a huge star, but I think it’s a huge shame. If you have never checked him out, do so as soon as possible and you will find out what a musical genius sounds like. This album is out at the beginning of December. Do yourself a favour and put it on your Christmas list. It’s certainly going on mine!