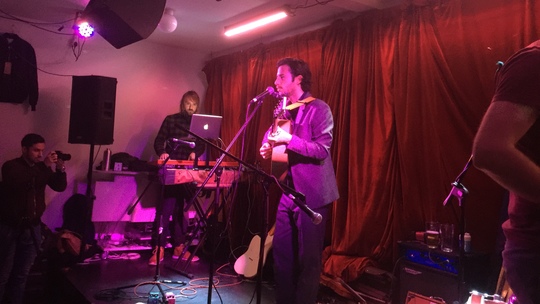 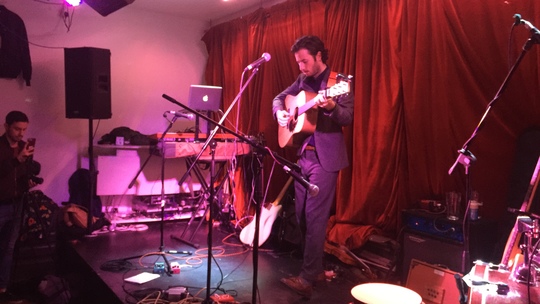 Paper Dress Vintage is a cut above the usual live venue in London; by day it is a vintage clothes boutique in Hackney; by night it transforms itself into one of the most select music venues with a warm, intimate vibe. You know that the crowd that is there have only come for the eclectic music on offer. Last night it was crammed to the doors with Jeremy Tuplin fans, there to witness the live launch of his critically acclaimed new album 'I Dreamt I Was An Astronaut' released in September on Folkwit Records – standing room only!

Opening act Sarah Berresford, better known as Oh Sister delivered a compelling set of self-penned songs accompanying herself on electric guitar as a prelude of what was to come.

By the time Jeremy Tuplin and his band hit the stage the room was alive with anticipation. Although this was an album launch it was clear that the crowd was made up of Tuplin cognoscenti who were there to celebrate the event: more than familiar with the songs released on the new album and ready to sing along at every opportunity. The band was in a hard driving mood and the audience was ready to rock when the tempo lifted.

What we were witnessing was a highly charged live performance of the studio album and from the very first chord struck on Tuplin’s guitar he had the crowd in the palm of his hand. Strictly adhering to the album format we were reeled in with the “Albert Einstein Song” that opens with a throbbing two-minute introduction before getting down to the business of questioning our place in the universe. Three songs in and we were hit with “O Youth”, unquestionably Tuplin’s most commercial offering to date and the fans were up and dancing, singing along with the chorus. This really set the mood for the rest of the evening however leaving space for more reflective material like “Kathleen”, “Robot Love” and “In Front Of Me All This Time”. Not one song was played without being greeted by enthusiastic roars of approval.

But it was the songs of Jeremy Tuplin that everyone had come to listen to and Tuplin did them proud. His stage presence is charismatic and having raised us to emotional heights he was ready to bring the tempo down – and the band numbers – until at the final encore Tuplin was alone on stage playing an acoustic version of “Time’s Essence”. There was palpable anguish and a few tears shed that this was to be the last song of an evening that had passed all too quickly – yet they had been on stage for over an hour. Clearly the crowd would have stayed all night and we were left with a feeling of certainty that we had witnessed the presence of a new star in the firmament that is Jeremy Tuplin.