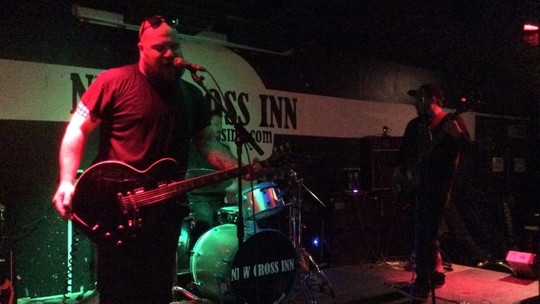 Once touted as a “revolution through destruction”, Mr Flee’s Mysterious Blues Experience certainly have you on the edge of your seat, with their mix ‘n’ match conglomerate of lethal lo-fi punk blues with a few mean covers thrown in for added kudos.

The eponymous front-man is Kevin S Flee on guitar and vocals, accompanied by the towering Gentleman Bull on drums, and Liam Cubes on bass guitar and backing vocals.
Their overall sound? Imagine if an incompetent dentist extracted the toothache pedestrianisms of the post B.B. King/Stevie Ray Vaughan-worshipping Chicago ilk, but not before anaesthetising them with the aftershock essence of early Sabbath and The Birthday Party, and releasing them on a mid-‘60s ‘Nuggets’ compilation.
Beginning with a cover of The Misfits’ ‘Scarecrow’. They grab you by the jugular with ear-splitting industrial-sounding drumming; strident vocals and very rhythmic guitar effects - which bring to mind U.S. proggers, Tool in the second number ‘Bullet. The third number ‘Striptease’ has an earthy strut like The Chocolate Watchband on steroids.

They unashamedly cover The Talking Heads’ ‘Psycho-Killer’. Totally devoid of the art rock Byrne-isms of the original; Kevin and co play it like their lives depend on it, as if the extreme heat of the infamous NYC ‘77 blackout summer is burning their backs. NYC is again referenced in their cover of The Beastie Boys’ ‘Fight For Your Right To Party’. This version seems to revere an idealised scenario of a Beasties follower circa mid-‘87 stealing the hubcaps from a VW as a means of adornment, rather than the metal motif.

The real treat is the seismic shift to the ‘50s Rhythm and Blues jaunt of ‘Old Fashioned’. It reminds me of a journey through milky U.S. suburbia: all picket fences and newly-mown lawns, and meeting your date at The soda shop. Liam plays a ‘My Generation’-sounding solo during the bridge, and Kevin encourages the audience to join in. The definite flip-side of The Experience.

They climax with ‘Hot Ticket’: a white noise spontaneous medley incorporating ‘Baby, Please Don’t Go’, The MC5 and Bo Diddley’s ‘Who Do You Love’ - played at breakneck speed. A fitting testimony to their touchstones.

The Mysterious Blues Experience have taken ‘the blues’ to new heights: unchartered territory to their more successful contemporaries, The White Stripes and The Black Keys. One for the men. Not for the boys.