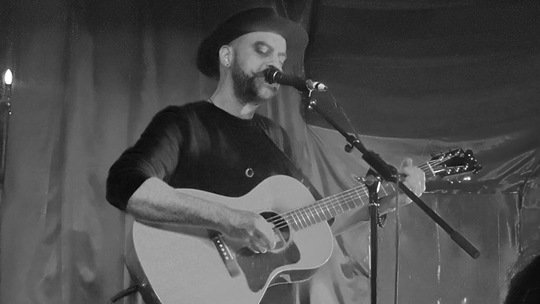 If the river is a symbol of how far we’ve come, then in the words of John Muir “the rivers flow not past but through us."

Every so often an artist comes along that takes your breath away and River Matthews is one such case. Born in Surrey, the former musical therapy teacher released his debut EP 'Feels Like Morning' in 2016. Since then, he has supported the likes of Rag ‘n’ Bone Man and Coasts; and has performed at some of the UK’s favourite festivals such as Boardmasters, The Great Escape, and the Cambridge Folk Festival to name a few. Currently embarking on his “Feels Like Morning” headline tour of the UK and Ireland, I joined River at a quaint venue in London’s sought-after Angel for his sold-out show.

I don’t recall when I first came across his music but I’m grateful that I did. There is something sublime about the songwriter’s distinctive voice which creaks and rasps with wisdom and experience greater than his years. River manages to blend soul and folk so effortlessly that it transcends eras and genres. There is a purity that emanates from the poignancy and sincerity of his work that oozes charm and magnetism.

“Undo Ordinary” is a song inspired by the songwriter’s parents and has a dreamy riff that sounds like summer rain on a Sunday afternoon. It’s a ballad about a special kind of love that lasts a lifetime. Where, were it featured in a movie, it’d star an old couple gently swaying in each other’s arms in the kitchen after dinner to the sound of the radio. Its pure romance captured in composition.

“Feels Like Morning”, with its echoes of Anderson East (another songwriter whose music is a potent, heartfelt fusion of soul, rhythm & blues and a dash of country) is an upbeat song about new beginnings, that beautifully flaunts the signature rasp in River’s voice. To plagiarize the song’s lyrics: ‘how sweet the sound! … It soothes me!’

One of the more touching moments in the evening came by way of “Stars”, a gorgeous narrative written about River’s family. The story goes that River was staying in Scotland and went for a walk and was inspired by observing a clear night sky that made him realise who the most important people is his life were. The song is written as though he is talking to his young niece and telling her to count her own stars.

Throughout the evening, the crowd were super attentive. You could hear a pin drop. However, it was only on the penultimate song of the 13-song strong set that the crowd loosened up and danced and clapped to the music. “Sunshine”, the only other upbeat song of the evening, is highly infectious with its gospel opening phrasing and bouncy positivity, whose chorus could match the rowdy retro sound of Nathanial Rateliff & The Night Sweats.

Support on the evening came from the Glass Child, aka Charlotte Ericsson from Sweden, a highly accomplished 26-year old. She has released 6 critically acclaimed EPs and 3 full-length albums, and can claim author to her range, having published 3 books. Charlotte has a real flair for song-writing and her songs sound like you’ve heard them before even if you hadn’t. “Letdown”, a song written in a New York hotel room and about being true to yourself and making music to be shared and enjoyed collectively, sticks out.

River Matthews will release his debut album ‘Imogen’ in January 2018.