Rattlebag - For All The Kids On The Bad Santa List! 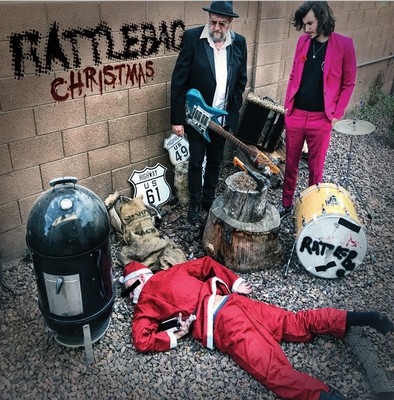 Rattlebag Christmas - Punk-Rock carolers for all the kids on the naughty list!!

Their mantra is “Fuzz, Feedback, & Freedom” and they gave the middle finger to the label rejection letters to make your holiday merry or scary and bright.

They sound like they've just stumbled out of a rat-infested, garbage-strewn alleyway after an all-night binge. They’re creating a sleazy, trashy excursion into the sordid underworld of Rock n' Roll where absolutely anything goes and where very few participants actually get out in one piece. It's a sinfully enticing noise born out of the gutter and raised on the deserted street corners of New York City. It's recklessly clothed head-to-toe in ripped denim and black leather with a permanent, sneering scowl, it’s a crude musical art form.

Rattlebag is comprised of Michael Petry, a multi-instrumentalist who also plays guitar and sings in the pop band “Daisy”, but in Rattlebag, Michael plays drums and ‘sings’ only occasionally. His influences range from the Sex Pistols to the Italian composer Nino Rota who is best known for his Fellini and Visconti film scores. Fronting Rattlebag is Mike Eldred, a multi-instrumentalist who founded the roots/blues band, “Mike Eldred Trio”. In Rattlebag, Mike ‘sings’ and plays guitar. His musical influences are also varied and range from prison work songs, gospel, classical, & zydeco which Mike refers to the “happiest music in the world.”

With Rattlebag they have created something new and unbridled, an experimental and unconventional music experience, an alternative to the basic band formula. There were no songs, it was meant to be a live experience. No rehearsals, just get up and create live music on the spot. One day they were talking to some friends who were doing a Christmas record, and thought, “hey, why not.” So, they hit the studio for a few hours and recorded some punked out Christmas songs.

A Rattlebag Christmas includes holiday classics such as “Auld Lang Syne,” “Angels we Have Heard on High,” “Deck the Halls” and “Jingle Bells.”