To Be Blunt, He Was Brilliant! 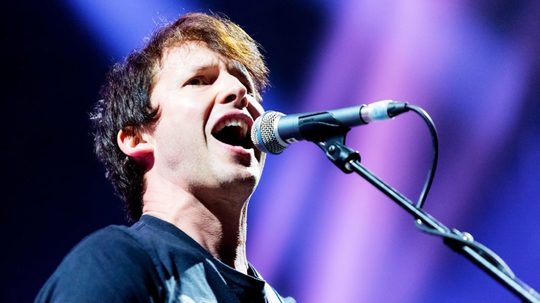 No, don’t just look at the headline and think, ’What is this guy on?’! Hear me out and, as George Michael once said, listen without prejudice. Yes, I bought the tickets for my wife, and yes I thought I’d endure it rather than enjoy it, but I gave him a chance and was richly rewarded.

First up though were the smooth vocals of Jamie Lawson. Obviously he is best known for the playlist favourite ‘I Wasn’t Expecting That’ but the other songs in his set showed a singer with a strong basis to kick on as a headliner in his own right. ‘Cold in Ohio’ was the song that really started to win over the audience, a process continued with ‘Tell Me Again’ and ‘Can’t See Straight’. He showed a wry sense of humour with the less attentive audience members, telling them that he could see them going on to Spotify to stream his latest album! His final three songs were the ones that showed off this singer/songwriter as a burgeoning talent in his own right and not just a newer version of Ed Sheeran which I had somewhat written him off as on the basis of his big hit. He started off with ‘A Little Mercy’ where he had the bulk of the audience singing the chorus, followed that up with a song we were expecting and then finished off with ‘Ahead of Myself’. Jamie Lawson clearly isn’t getting ahead of himself, but with another decent album he could easily be doing the main set in venues like the Apollo within the next year or so.

The reaction when James Blunt came on stage was absolutely immense as thousands of mainly female cheers rang out. The bulk of the men were reserving judgement at this point! ‘Heart to Heart’ from his latest album got the set off to a powerful start. Blunt was full of energy and crunched out the song on his guitar backed by a tight band that complemented him perfectly on this as they did on every song during the night.

‘I’ll Take Everything’ kept up the intensity and I started to realise that the CDs I’d listened to didn’t begin to do justice to this consummate performer. He is a real rocker in the Bryan Adams mould who has been defined and largely dismissed courtesy of one monster hit which happens to be a love song … well more of that later!

By the fourth song ‘Time of our Lives’ I had abandoned my initial reserve having been won over by his presence and his sheer musical ability. He plays a mean piano as well, let me tell you! His famed humour, seen most regularly on his very funny Twitter feed shone through with his self-deprecating wit seen best in the stories of touring America as ‘Ed Sheeran’s bitch’! (By the way, even if you aren’t convinced by this review, follow him on twitter anyway!). His story about singing a very political track to the Americans without them having a clue that it was in any way political had the audience in fits of laughter.

‘Lose My Number’ was another highlight as he sang with real passion and had the audience screaming the chorus back at him with gusto. To be honest, by this stage I had totally abandoned my critical faculties and was fully converted. The big surprise was, yes, ‘You’re Beautiful’ which is transformed live in to a song with an edge to it courtesy of much stronger guitar work and the fact that he still takes it seriously, still appreciates its impact on his career and is determined to do it justice.

The last track before the encore, ‘OK’, was a total change of tempo and style from everything else in the evening and a brave choice to end the main set-list. The encore was excellent as you would expect, but the last two songs ‘1973’ during which he pounded the piano into submission before ‘surfing’ on it and ‘Bonfire Heart’ which had all the husbands and boyfriends belatedly belting out the lyrics, just finished off this night of pure entertainment perfectly.

Whether Blunt is to your taste or not, you can’t deny that live he is up with the best of them. I salute this former soldier without hesitation!