Gabi Garbutt & The Illuminations At The Camden Monarch 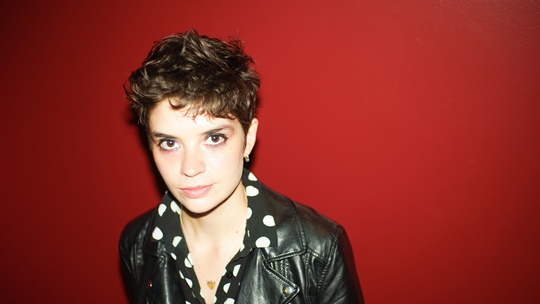 Gabi Garbutt’s debut single ‘Armed With Love’ has been getting support from the likes of Radio X and various blogs, but this having piqued our interest we discovered that this rather sensitive offering is only the tip of this West Londoner’s musical iceberg.

The Gabi Garbutt live experience, we soon discover, is an altogether more rowdy and punky affair. Part of that is down to Gabi herself, who, clad in a red striped t-shirt and jeans, throws herself into her set with such abandon and righteous passion that it sometimes brings the mighty Joe Strummer to mind.

The other weapon she has at her disposal is an extended band – including her, they number six – that is capable of packing the power of a top guitar band but is capable of going above and beyond the usual. The inclusion of two keyboards, numerous backing vocals and a brass section means the songs far outstrip the normal confines of indie, with a rousing extra dimension that takes the songs into exultant euphoria at moments.

There’s an obvious comparison to be made at such moments, as Garbutt’s close collaborator on the whole project is Sean Read of the legendary Dexys, who is at her right hand at the show and whose enthusiastic sax playing is often the irresistible icing on the cake. The comparison with the bursting soul urgency of Dexys is present throughout but probably most obvious during ‘I’ll Do Anything’, the b-side of ‘Armed With Love’, with a clear 50s rock ‘n’ roll influence.

But it’s only one of many highlights in a set that is high on energy and variety, and which has the audience not merely asking for an encore but demanding it with the kind of voracity that is pretty rare in the often nonplussed London pub gig circuit. If you’re a fan of guitar music but feel it’s just not realising its full potential at the moment, we reckon you’d love Gabi Garbutt.