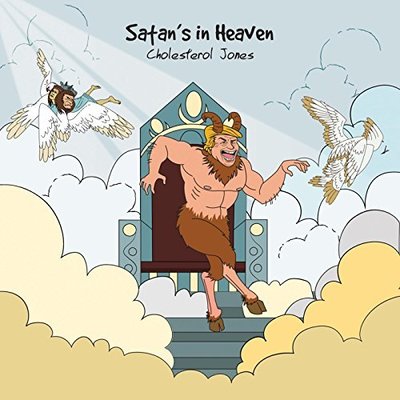 With albums of the year lists littering the internet like soggy leaves and Record Store Day once again rearing its head with smug apathy and a grateful community of eBay traders, it's clear that once again, the music industry has descended into a well of boredom and self-congratulation. It's the kind of world Jools Holland has always threatened us with.

Cholesterol Jones has retired from playing live, an appropriately contrarian decision but one which is entirely understandable. Playing them at their own game, his method of attack (music aside) is via animation, a perfect vehicle for Generation Y and their impressively meager attention-span and attraction to bright colours. His self-made video to the lead track of his deliciously bitter-sweet EP, 'Satan's in Heaven', is a perfect example of Cholesterol's impressive knack of entertaining you whilst simultaneously kneeing you in the groin.

K-Tel would no doubt tell you that if you only listen to one gospel-tinged country pop anti-Trump masterpiece this Autumn, make it this one. It would be sound advice. Though it has the wayward eccentricity of a novelty record, it becomes clear very quickly that Cholesterol is judging the listener as much as you are judging the song. If you think it's a bit daft, it reflects more on you than him.

Elsewhere on the EP, other areas are explored with quiet introspection and a skillful way with couplets and some understated acoustic guitar and Moogy moments. There are echos of 80s singer-songwriting troubadours in his rather wry delivery and an elevated wit and skill with storytelling that tells you that Cholesterol has done the round for a while. This will absolutely not be the top of anyone's record of the year lists, precisely because it's, frankly, too good to.