Vista Kicks at Streets of London

Bringing The Booty Shakers Ball To The Streets Of London 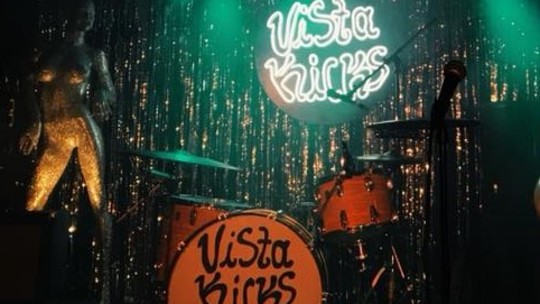 The past decade has seen its fair share of cool indie bands who came out of nowhere to become a part of today’s music culture. But only one I can think of is creating their own genre which they have coined “Booty Shaking Rock N Roll” and I think it will only be a matter of time until they became influencers of a new rock n’ roll generation.

Vista Kicks played Streets of London in Denver on December 2nd and although it was chilly outside these boys heated it up inside. As soon as they took the stage you knew right off the bat that they’re here to have fun and you were about to take a Booty Shakin’ ride with them. Call it controlled chaos, call it a rock n roll dance party or call it a Booty Shankin Ball. It’s planned out and intentional, and about as much fun as you can have without getting arrested.

A sweeping plunge of distorted guitar sets off a steady drum beat, and before you know it Vista Kicks are off and dancing, with driving beats and infectious chorus’ lead by singer Derek Thomas. As Thomas belts out song after song, the guitarist exposes one infectious riff after another.

The songs are enticing and catchy, rhythmic and clever. Vista Kicks truly are descended from past decades of trailblazers, with a lil 70’s funk and rock n roll bombast, Thomas croons like a 1950’s heartthrob.

From their recorded album to their live performance, the band somehow manages to deliver a sound that feels true and authentic to themselves and to anybody who joins their party.

Thank you, Vista Kicks, I had a blast.