Dylan Earl At The Betsey Trotwood 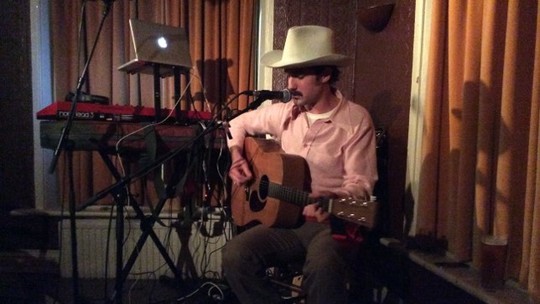 Louisiana-based Country star, Dylan Earl certainly showed his London fans last Friday that he was totally at ease in a playful netherworld of radio-friendly Country and Americana. Attired in the prerequisite uniform of sharply-pressed slacks, cowboy boots and open shirt; the young moustachioed singer songwriter made an understated but impressionistic statement from the four-foot wide triangular stage of The Betsey’s upstairs venue.

Normally performing with his three-piece band, The Reasons Why, it was just himself sitting down, playing a borrowed acoustic for this - his second London gig. It was like he was playing to friends from the front porch of a depression-era southern shack of the kind once belonging to Vernon and Gladys Presley.

Such intimate surroundings allowed you to appreciate the intricate personal imagery of his songs epitomised by ‘Blessing In Disguise’ with its early Tom Waitsian tableau of empty bar stools and the clock ticking towards doubt and uncertainty. It was akin to the vulnerable essence of Elvis Costello’s Country curio album, ‘Almost Blue’ rather than the cocksure swagger of Johnny Cash or the querulousness of Hank Williams.

‘Johnny Alabama’ was a nod to the plight of the temptation-prone American Everyman with its hard-hitting visions of cracked lips and scuffed boots. It reminded of a hybrid of ‘Automatic For The People’ R.E.M. and Gram Parsons’ lost recording, ‘They Still Go Down’.

The wintry ‘Cold As The Rockies’ about why you should not move in with your lover is a cautionary tale which hits an emotional core. This was also true of the Guy Clark cover that Dylan played towards the end of his set. His judicious use of open chords gave ‘Rockies’ a nicely suspended feel.

As a guitar-player, he has a deceptively simple strumming/picking technique which is both laid-back and punching.

Dylan Earl is certainly aware of his ability to provide all-round entertainment without pandering to the self-deprecating meal to Nowheresville. The perfect tonic to ‘Dry January’.