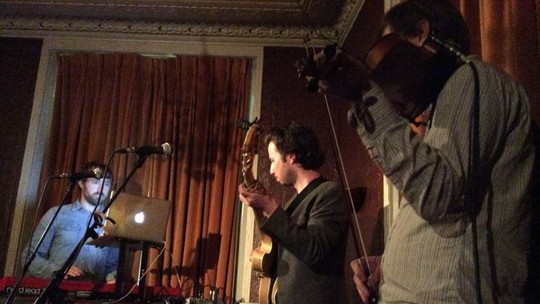 Jeremy Tuplin is one of those occasional musicians who, like Badly Drawn Boy with Springsteen’s ‘Greeting From Ashbury Park N.J.’ and Animal Collective with The Beach Boys’ ‘Smile’, focuses on a ground breaking epoch of a key influence and uses it to forge their fan base.

In Tuplin’s case, it is David Bowie’s ‘Space-Oddity’ from late ‘69 - which was definitely redolent last Friday at this Clerkenwell music pub - by the whooshy sounds of fellow musicians, Matt Fleming on keyboards and Maris Peterlevics on violin. JT was playing an electric Gibson.

Tuplin, himself stemming from an English Folk tradition, has an idiosyncratic voice rather like early ‘70s singers Kevin Ayers and Clifford T. Ward.

The opener ‘Albert Einstein Song’ begins with a waterfall of celestial noise, allowing Tuplin to take the unusual lyric step of making Einstein and Bowie synonymous with each other. Original thinkers both, in their respective times. The man knows his history. Not just in the Pop sense.

The second song, ‘Where The Light Ends’ refers to the stars and cosmos like Pink Floyd’s ‘Astromony Domine’, but it is a sombre thought-provoking song about the fragility of humanity. The buoyant-sounding ‘O Youth’ is a blatant contrast (Tuplin’s early ‘90s childhood is shown in the video, making this writer feel old). It has a very cool Flaming Lips vibe and the lovely-sounding violin reminds me distinctly of Primal Scream’s ‘Inner Flight’.

Another instrumental treat was the squidgy-sounding keyboards of ‘Robot Love’ which nicely encroached on Tuplin’s delicate finger-picking. More ‘Memory Of A Free Festival’ than Major Tom.

One of the concluding songs was the bittersweet ‘Astronaut’ which seem to trash any ‘Boys’ Own’ conceptions of being a Spaceman. It created a sense of burdensome responsibility probably felt by the “Superheroes” in the comic strip ‘Watchmen’.

Jeremy Tuplin writes intelligent songs which unashamedly pay homage to one’s inner geek. In these soundbitten times we live in, the attention span is making a comeback.