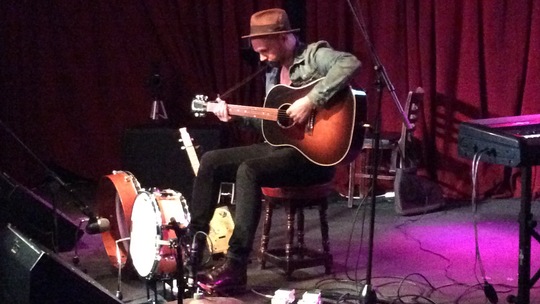 With his more than reverent penchant for pre-WW 2 Delta Blues, Ben Hemming could easily be accused of taking the easy path towards a crowd-drawing niche market. That, however, is not the case, if his stand-alone musical persona is anything to go by.

His songs are embellished with a contemporary alt-rock sheen which give an obvious nod to the likes of Sonic Youth and Arcade Fire; while his ‘One Man Band’ performing set-up goes full circle to the bygone days of Jesse Fuller.

Now aged 37, he has spent the last few years extensively touring Europe and the U.S.A., soaking up influences that can be read about in both his blog and vlog.

On Monday night in sedate riverside Putney, this suitably nomadic musician used his acoustic guitar chords and riffs as ammunition for his straight-ahead original songs. Hemming plays rhythmic blues with little in the way of impro-noodling. This is exemplified in ‘The Old Country’ - naturally recorded at Jack White’s The Third Man label last summer. His twin pedal-drums pound ruthlessly in the best Moe Tucker fashion.
‘Rambling Man’ - all about his travels - has a religious fervour evocative of Blind Willie Johnson. Things are taken to an almost elevated level with the guitar nicely synonymous with the drums. It has a short but sweet shoegazer-style ending at the end. Unexpected bliss.

‘Broken Man’, which suitably follows, sees Hemming play his cigar-box guitar using a judicious amount of bottleneck, with a shimmery Hubert Sumlin attack all the way through. For still a young guy from the West Midlands, his knowledge is frighteningly impeccable. You wouldn’t want to steal his thunder in a pub discussion about Paramount 78s!

The desperate ‘My Drinking Days’ has a folky strum and a Kurt Cobain-esque key-change. Cobain’s appreciation of Leadbelly has been well-documented over the years, and it is fitting that Hemming has recorded a You Tube film of himself playing a cover of Nirvana’s cover of The Vaselines’ ‘Jesus Doesn’t Want Me For A Sunbeam’. It reinforces the somewhat unacknowledged point that ‘grunge’ was directly descended from ‘the blues’. An intelligent all-encompassing move.

In the current climate of the inane applause machine, we should be thankful that we have maverick musicians like Ben Hemming who are willing to ‘educate’ us, while putting themselves out on a limb. They don’t come round very often!