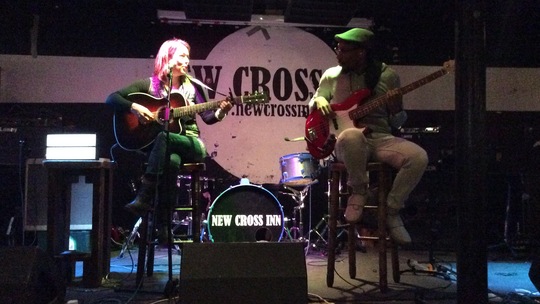 The unusual background of Tamar Doyle, the leading-light/Singer-Guitarist of the folky combo Travelling Souls, certainly is akin to the diversity of the traditional music she plays.

Well into her thirties, she was born in Yorkshire but moved to Israel and was raised between the two countries. Six years ago, she left her job as a designer in Tel Aviv to launch her music career. She soaked up the sights and sounds of India while recording her debut album ‘Simply Me’. London-based since 2013, she later formed Travelling Souls - also consisting of Bassist Marcus Smith and Drummer Mike Crevier.

Last Sunday, they played an aesthetically understated drummer-less set at this popular South London venue as support to headliners, the early Fairport Convention-influenced The Galley Beggar.

Beginning with ‘Simply Me’, a solo piece, Doyle displays a vocal-style which brings to mind the strident sass of Debbie Harry - which is a nice contrast to the ‘Lucy In The Sky’ lyrical imagery of paper boats and honey bees. ‘Carousel’ - in which Smith first joins her - is more up-beat and has a swirling feel to it with fruity chord-changes and a resonating Mick Karn bass-sound.

The mood switches yet again with ‘Forget Of Go Insane’ which conveys the frustration of being in a bad mental place. It distinctly fades out towards the end, ensuring its mercurial quality.

After the fairy-tale foreboding of ‘Mirror Mirror’ and the sprightly eponymous reference in ‘Lift Off’ (“free as a Travelling Soul can be”), Doyle earthily concludes with ‘Start Again’ - a pleasure-filled bumpy ride of a song. Not too dissimilar to Joni Mitchell’s ‘Big Yellow Taxi’.
This eclectic half-hour set by Travelling Souls was a veritable mini-album in itself. The perfect travelogue this side of the leanings of Page and Plant!