REVIEW gig Micko and The Mellotronics The Spice Of Life, London, February 16th 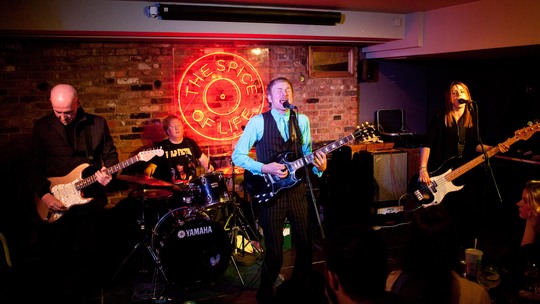 Well, they say a change is as good as a rest, and that was certainly the case with the unveiling of the new line-up of Micko and The Mellotronics last Friday.

Appropriately making their debut in this popular central London watering-hole; the line-up in question was a case of ‘when three became four’, and they most definitely ushered in a more dangerous-sounding potent career-chapter.

Thinking back to rock-pantheon history. Three-piece bands, who have undergone a similar metamorphosis, don’t instantly spring to mind. The only vague occasion I can remember was when Pat Smear joined Nirvana during their fateful numbered days back in late ‘93, as a touring-guitarist.

In The Mellotronics’ case, the new personnel are veteran lead-guitarist Jon Klein and a young bassist Jenny Lane. Jon played with goth band Specimen and most notably, Siouxsie And The Banshees during their most musically ornate period in the late ‘80s - early ‘90s. Jenny - who has just replaced original bassist Brian Pistolesi - also plays in Planet Of The Capes. Out of the original line-up, Nick Mackay is still on drums, providing a stalwart Keith Moon powerhouse presence, and then there is Micko.

Wearing a customary retina-scorching shirt - this time aqua-coloured - and brandishing a Gibson SG, he marshals his troops for the hedonistic opener ‘Schmescos’. Jenny provides suitably dense playing as well as backing-vocals reminiscent of The Only Ones, giving the song a delicate beautifully guilty air.

‘Sick And Tired’ sounds more rigid than before. With clenching vocals and holding onto his barre chords for dear life, Micko, as always, makes the song his signature trademark, allowing the 57-year-old Jon - who has by now reached the exalted position of a latter-day post-punk Clapton - the fleeting opportunity to re-visit his Bristol punk roots.

‘Casting Couch’ begins with a dangerously compressed ‘Another Girl, Another Planet’ descent which suits its contentious subject-matter well. Micko is lying on a couch of a different kind in ‘Darkness Closes In’ wryly introduced as, “one for my counsellor”. The relentless pounding of Nick’s drumming setting the head-case seal on things.

‘Scout Hut Disco’ and its use of BBC Radiophonic sound effects is a nod to Doctor Who fan Micko’s days as an electronic film composer. Its Police-sounding reggae fervor is awash with surf guitar - which is also prevalent in ‘The Finger’ with it’s barely-holding-together but upbeat ‘Town Called Malice’ vibe.

Their final number, the opus ‘Noisy Neighbours’ is like early Black Sabbath covering The Beatles’ ‘If I Needed Someone’. Edge of the seat stuff and no time to fasten your seatbelts! It is interesting to note that when I first saw The Mellotronics last October, the closer was ‘Schmescos’. Now they have found a veritable book-end at last.

The proof is in the pudding. There is no going back now for this aesthetically-twisted highly individual combo. I can’t wait for the next album.