A Lifetime In Music In One Night 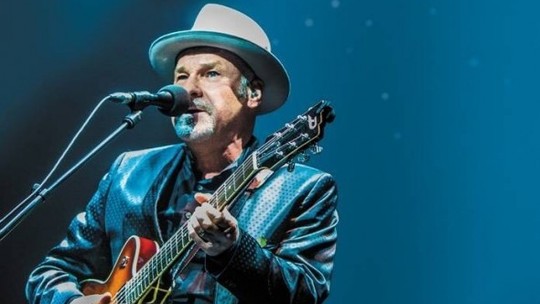 Paul Carrack’s name may induce blank looks or quizzical expressions amongst the majority of the public. In a sense he seems to have deliberately played things low key, with Mike Rutherford being the name behind his best known band. Mention ‘Living Years’, however, and people know that song and that voice instantly. On his These Days tour I finally managed to catch him live in concert and I was looking forward to a really good night.

The support act was Grainne Duffy, a sparky, funny Irish singer songwriter who instantly charmed the audience as she walked on stage armed with an acoustic guitar and her voice. Wow! What a voice! Whatever I might have been expecting was blown away within 30 seconds of her opening track ‘Don’t want to be lonely’. Despite coming from Castleblaney in County Monaghan her voice was pure American blues, although that particular quality that the best Celtic voices have gave her performance a fascinating undercurrent. She reinforced this with her coruscating version of the Bonnie Raitt song ‘Love me like a man’ featuring excellent blues guitar work. Her song ‘Home’ from her latest album was more reflective and had a much more Irish tone. As she explained it was written in L.A. and came from the experience well known to any traveler where you can’t wait to break away, but once you do you want to be back!

The highlight of the set though was her version of Etta James’ ‘I’d rather go Blind’ which just gave me, and no doubt the rest of the audience, goose bumps as she took on the legendary song and absolutely nailed it. By the end of the set she had the audience in thrall and, no doubt, heading to the internet to check out some more from this exceptional singer. I have seen a lot of really good support acts in the last few years, but she was definitely up there as one of the very best.

Paul Carrack opened his set with ‘Too Good to be True’ appropriately enough as all his experience of stage craft exploded in to the London Palladium together with a voice that would put singers half his age to shame. His first few songs went without a hitch especially the gorgeous ‘Must have been an angel watching over me’. Then, as he said himself, just when the concert was looking like any other his keyboard broke down!!

He handled it like a total pro, putting on an acoustic guitar for a great version of ‘Everytime that you walk in the room’ and then looking through the set list for other acoustic songs that he could use to fill in the gap while James Locke, who was fantastic on keyboards all night, ran around the stage trying to fix the keyboard before hauling it to the wings and replacing it with one of his own!

As Paul said, it never happened at Scarborough! Throughout the three songs it took to fix things he never showed any irritation, instead keeping up a very funny running commentary that had the audience laughing throughout. When he was seated behind the keyboard again, the stunning tracks came thick and fast with ‘These Days’ sounding like Bruce Springsteen in his more reflective moments and ‘That’s all that matters to me’ being my particular favourite of the night. It is a beautiful track, about letting your daughter go out in to the world on her own, but still being there if she needs you. I’m not ashamed to say that I got quite emotional at that point, as I imagine did many other dads in the audience.

The hits that got a particular cheer throughout the set were ‘Tempted’ which he did with Squeeze, ‘How Long’ his big hit with Ace in the 70s and ‘Over My Shoulder’ from Mike and the Mechanics. Of course he played the ‘Living Years’ a track that hasn’t lost its power in all this time. What really shone through was how much fun he was having with his band and how fresh all these hits sounded.

I have to say a few words about his band, which was packed with world class musicians. Saxophonist Steve Beighton could take on Clarence Clemons and not come off worse. Andy Staves supported the band with his tight guitar work throughout and really shone in his amazing solos, especially during the blues tracks. Jeremy Meek was a sublimely good bassist and vocalist who was the heart of the performance. The aforementioned James Locke added stagehand to his repertoire but never missed a beat! Finally the two drummers, Dean Duke and Jack Carrack were outstanding throughout. By the time he signed off with a fantastic version of Marvin Gaye’s ‘What’s Going On?’, Paul had just reinforced his status as one of the crown jewels of British music.

As a long term fan of Paul Carrack I have always wondered why he isn’t better known amongst the general public. After seeing this concert it seems even more inexplicable. I was lucky enough to meet him before he went on stage and told him how much I was looking forward to seeing him live. He said ‘I’d better be good!’ Well, Paul, you weren’t just good, you were absolutely brilliant!