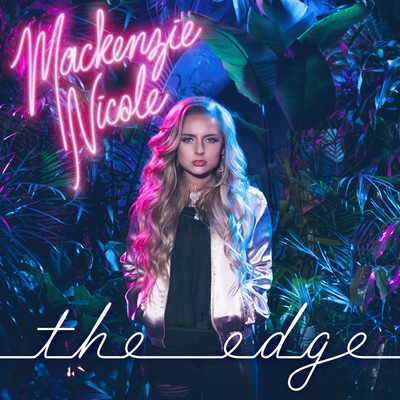 Mackenzie Nicole is an 18-year-old pop leaning singer and songwriter who grew up surrounded by hip-hop artists, in the world of the Strange Music label. She honed her chops at a very young age and is emerging from the cocoon, not as a butterfly but a dragonfly.

Her story is an interesting one, her family is a huge part of the hip-hop empire that is Strange Music, they didn’t necessary want a career in music for her, but she was so driven, that they couldn’t stop her. Lucky for all of us her determination was embraced by the label powers that be.

Mackenzie Nicole’s debut album “The Edge”, is the first release on the labels new pop music division Strange Main, and from what we have heard Mackenzie will be a tough act to follow.

“The Edge” is filled with melodies & words that will resonate on a very personal level, written by this 18-year-old, who seems wise beyond her years. The songs are an honest exploration of life, love, pain, overcoming fears & coming out the other side, maybe a bit cracked but not broken.

There is some formula production that intrudes, but Mackenzie’s personality pushes through with her striking vocals leading the way as she straddles the worlds of sassy pop, sultry singer-songwriter and neon pop soprano.

Her vocals fly in songs like “One More”, “Anxious”, and “The Bad”. While she is more vulnerable in “Fix Me” and “Not You” and she struts her strength in “Thank you” and “Darkside” as she sings “I’m not taking nothing for the pain because my music is my only novacaine.”

On her debut release this independent young woman is a solid mix of fresh vibes and smooth, sweet, honey as she sings songs with a message. Complicated and equally unflinching in her descriptions as she tells her stories with immediacy and intimacy, all backed up by her edge.