Down For You Is Up

Beginning To See The Light! 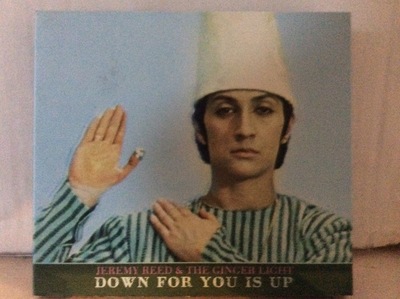 Down For You Is Up

Lauded by luminaries such as Pete Doherty and Richard Hell; 60-something veteran poet and author Jeremy Reed has never been shy of showing his inner rock-star.

He certainly portrays this chosen visage in ‘Down For You Is Up’ - a collaboration album with musician and producer Itchy Ear. They are known collectively as The Ginger Light.

Taking it’s title from a line from a 1969 Velvet Underground song, ‘Pale Blue Eyes’; the album is a conglomeration of spoken word, music and sound design.

It requires intense commitment on the listener’s part but ‘familiarity’ is the key to its overall enjoyment. Pop culture is inevitably the dominant theme. One immediately warms to the T Rex-backing in ‘Thieves Like Us (Sugar Baby Love)’ which depicts an illicit meeting of minds where a Svengali is omnipresent. Certainly the case in ‘Lonely Loner (For Brian Epstein)’ which discloses the turbulent private life of the late Beatles’ manager whose imagined fixation with grenadier guardsmen portentously twins with his boys’ ‘Sergeant Pepper’ period.

‘Saint Jamie’ is a testosterone-ridden portrayal of ‘punk’ backed by the pre-androgynous Stooges’ ‘I Wanna Be Your Dog’. ‘Dorian’ about a rent boy “ageless as a sugar daddy” is fully submerged in Donna Summer’s ‘I Feel Love’.

There is something for everyone on this album. Music is intelligently used to pinpoint the frailties of sexuality and the human condition. This is epitomised by ‘My End (Death Of A Clown)’. Dave Davies’ self-deprecating ‘Death Of A Clown’ from 1967, is festooned with modern-sounding keyboards giving a hallucinogenic feel, as if to show that every decade’s respective party will always end with a whimper. Never a bang.

It certainly helps if you appreciate your rock history to really understand what Jeremy Reed and The Ginger Light have to say. If not, this album will definitely inspire you to!