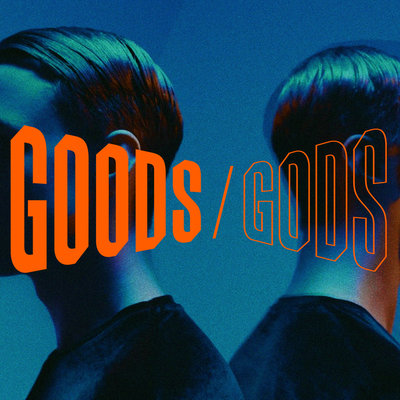 Just over two years ago I started my reviewing career for Subba-Cultcha.com by listening to Hearts Hearts’ debut album ‘Young’ so when ‘Goods/Gods’ became available to review I couldn’t wait to see where their undoubted talent would take them.

Hearts Hearts second album starts off with the track ‘Phantom/Island’ that showcases their ethereal vocals so much in evidence on their superb debut album. However, where Young was choral in style with very subtle electronic nods to Depeche Mode amongst others, this is far more overtly electronic with some Vince Clarke style synthesisers.

In the title track ‘Goods/Gods’ they channel Yazoo in their own cool Austrian style. ‘To have/ to be’ is a subtler track with a style more in line with their earlier work channeling the Nordic Noir of Choir of Young Believers most famous for their theme tune for The Bridge.

‘+/-‘ is a gorgeous song with lovely guitar work at the start and the gorgeous vocals that set them apart. ‘I was there/ no one came’ has a fascinating vibe that puts me in mind of Talking Heads crossed with Blancmange and is definitely a track that would reward repeated listens. ‘Do you often think about’ is a gorgeous track with a dreamy musical soundscape and beautiful, haunting vocals. It is definitely my favourite track on the album.

‘Sugar/Money’ continues the excellent run of tracks with its more upbeat tune and lyrics. ‘Imagine/ Many lives’ is probably the track that reminds me most of Young and I think it’s one of the tracks that longer term fans will most appreciate.

‘Take/Care’ is very minimal in nature, almost jazz style in places, which draws the listener to listen more to the vocals which weave their spell in a more overt way than they do when given more instrumental backing. ‘Present/Tense’, the final track, is a Pet Shop Boys style electronic track that fairly rips along compared to the rest of the album and gives them a very different sound to play with which they really work well with.

I think this album showcases the very different directions the band are capable of going in, and in that sense it is a very good second album. They commit to the tracks musically and emotionally and carry the listener along with their new directions. It is never less than fascinating from first note to last note. For me, though, it works best when focusing on the vocals in the way ‘Imagine/ Many Lives’ does as that is what sets Hearts Hearts apart from the rest of their contemporaries.