A Gem Of A Show From Some Absolute Diamonds 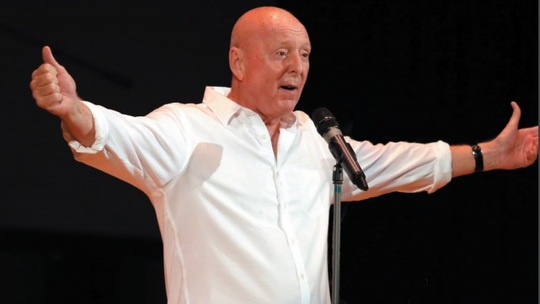 When I went to the Chatham Central Hall to see Stand Up and Rock featuring Jasper Carrott and Bev Bevan I was hoping against hope that the night was not going to spoil my memories of my favourite comedian of the 70s and 80s.

First the stand up. From the moment Jasper walked on to the stage it was clear that he was as good as ever. Last year he had a heart bypass operation but he looked incredibly fit, full of energy and was clearly overjoyed to be back. The trademark wry observations and occasional flights of fantasy were all present and correct, and his control of an audience honed over years of gigs was fully in evidence. He was absolutely hilarious from beginning to end as he started each half of the show. His observations on aging were spot on and his updated version of the motor insurance claim forms was met with cheers when he announced it. He was very reflective in places as he came to terms with not being so young but many moments of reflection were accompanied by a joke that, far from puncturing his serious point, only served to make his observation more profound.

Not one joke was wasted and I honestly can’t remember laughing so consistently at any live show. At the end of his second set he strapped on a guitar and played a series of apparently throwaway comic verses that were extremely funny especially one that he reckoned had cost him a knighthood! More of Jasper later as we get to the Rock!

The Bev Bevan band came on stage in the second half of each act, and in the first half there was a clear sense of disappointment when Jasper walked off stage as he was the man we’d come to see. That sense of disappointment lasted hardly any time at all as we were treated to a video timeline of Bevan’s Zelig-like career, taking in his stints with The Move, ELO and Black Sabbath amongst others, backing California Man by The Move which cleverly segued in to Paranoid by Black Sabbath.

Two things were immediately clear. First, this guy can still play the drums like no one else and second, that his band were all great foils to that drumming with their consummate playing. That band featured Abby Brant on keyboards, Phil Tree on bass and Tony Kelsey on lead guitar. They all had their turns in the spotlight, quite rightly, but for the rest of the evening they provided the backing to allow the central performers to excel.

The first guest of the evening was Geoff Turton who was the lead singer of The Rockin’ Berries, a 60s group that I must admit had flown under my radar. Like Jasper he was the other side of the official retirement age, and like Jasper he clearly adores being on stage after so many years doing the job that he loves. Outside of Jasper he made the best joke of the night pointing out that there was £800 worth of winter fuel allowance on the stage! He started off with a Beatles medley that got the audience singing along, and from there didn’t put a foot wrong all night, even managing a falsetto version of ‘In Town’ a Rockin’ Berries hit from 1964, no mean feat for even the most experienced singer given the alteration in a singer’s vocal range that age induces.

The other main guest was Suzi Woo, a 31 year old singer with an incredible voice. I only mention her age because Jasper introduced her by saying it was like working with a foetus (!), and because her relative youth made no difference to the way that she performed with the band. She stormed through an amazing version of ‘Natural Woman’ and duetted with Turton on a rousing and brilliant version of ‘Love Lift Us Up’ from the soundtrack of ‘An Officer and a Gentleman’, their voices blending together beautifully as they matched the Joe Cocker and Jennifer Warnes original.

The final section of the night saw Jasper join the band with acoustic guitar, singing with real gusto and skill on a range of songs from ‘Rockin’ All Over The World’ to a duet with Woo on ‘Don’t Bring Me Down’ and the stone cold classic ‘Funky Moped’!! The finale saw the audience themselves stand up and rock to end the show. It was a great night that showed the benefit of camaraderie, experience and showmanship, and proved that if you’re good enough you’re still young enough!

Thanks Jasper, you’re a legend!