The Roadtrip & Workshop, London, May 3rd

REVIEW gig Micko and the Mellotronics The Roadtrip & Workshop, London, May 3rd 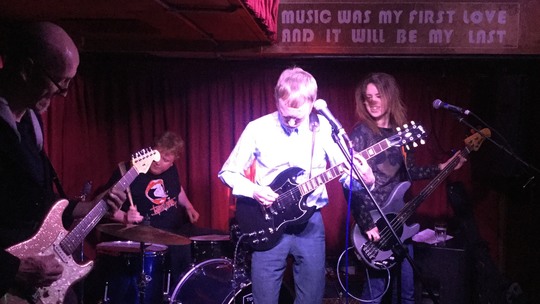 Despite the rather incongruous gig location - deep in the heart of mainstream hipsterville - somewhat contrary to their ‘stand-out-from-the crowd’ individualism; Micko and the Mellotronics executed a brutally mesmerising performance last Thursday. This certainly consolidated the glowing ascension of their relatively new four-piece line-up.

Four days fresh from playing their first out-of-town gig supporting The Blue Orchids at Talking Heads in the port of Southampton: territory no doubt once-familiar to drummer Nick Mackay and bassist Jenny Lane (from Portsmouth and Bournemouth respectively). The return trip home sees them play alongside several other acts. Standard procedure, yes, but one which does little to affect their overall dynamic.

The attention inevitably focuses on the slightly-built frame of leader Micko Westmoreland himself. Resplendently kitsch in a matching paisley shirt and tie: of the kind Rodney Bewes would wear to a cheese and wine function in a ‘Likely Lads’ episode circa 1973; he strikes the opening chords of the anthem-like ‘Schesmos’, and the train gets a rollin’.

Playing a no holds barred set literally against the clock, their potent panache hardly needs introducing. ‘Sick And Tired’ has the dual lead-vocals of Micko and Jenny - nicely evoking the imagined scenario of Jefferson Airplane gatecrashing The Roxy or The Mudd Club, a decade into the future. The song is brilliantly embellished with summery Pretenders-style lead guitar courtesy of ex-Banshee, Jon Klein. Jenny provides Spector-style ‘Wall of Sound’ backing. Nick’s relentless drumming, as always, is the glue that somehow binds it all together.

‘Psychedelic Shirt’ has a mid-‘60s Spy Theme hook encountering the portentous descent of The 13th Floor Elevators’ ‘Rollercoaster’. A cyclical but catchy potential A-side in the making, no doubt.

‘The Now’ has a ‘I Wanna Be Your Dog’ fragility, with Jenny providing almost Beatle-like backing harmonies. It was only two and a half months ago that she played her first gig as a Mellotronic. Leaps and bounds is more than an apt description.

They conclude with a new song, the fetish-centric ‘Imelda’. She of the large shoe collection, not the late ‘80s ‘Grange Hill’ character. This song is akin to the back lashing essence of Micko’s pre-Mellotronics album ‘Yours Etc Abc’. A seismic shift in songwriting: from the album’s rain-lashed LIDL car park imagery to matters of ‘global denouncement’. And yes, her snub of The Beatles in 1966 gets a mention. The perfect finale to everything The Mellotronics have to offer.

Each Mellotronic did their damnedest to ram home their overriding messages. Hats off to them. It was Micko’s birthday after all. The perfect gig. The perfect present.